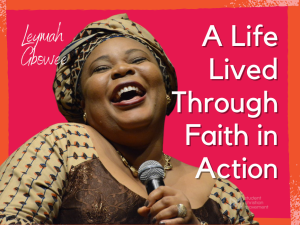 May 16th is the International Day of Living Together in Peace. It is a day in which we are encouraged to recognise efforts to promote peace, tolerance, inclusion, understanding and solidarity. As such, it is a great time to reflect on the incredible work of Liberian peace activists and peacemaker Leymah Gbowee, who, along with her fellow Liberian women, put her faith into action and helped to achieve peace after 14 years of civil war.

Despite being the joint recipient of the 2011 Nobel Peace Prize, Gbowee is perhaps less well known than the previous two examples of a life lived through faith in action I have explored, Archbishop Desmund Tutu and Archbishop Óscar Romero. However, her accomplishments and the example of faith in action she represents are equally as inspiring.

In 1989, shortly after she graduated high school, Gbowee’s life changed forever when civil war broke out in Liberia. Almost immediately her plans for the future were taken away, replaced instead by the reality that comes from living in a conflict zone. Gbowee has been open about how this impacted not only her metal health but also her faith. In her memoir Might Be Our Powers she states ‘I was afraid, especially at night, but I also got more and more angry. They say God responds to our prayers but we have been praying for deliverance and nothing happens. The war is not ending. We are not going home. He is not listening to us.’[i] Gbowee did eventually regain her faith, although the path back to it was fraught with suffering, both as a result of the continuous cycle of war and violence in Liberia and her own personal experience of being in an abusive relationship during this period. However, this suffering is one of the things that helps define why Gbowee is so inspirational – as she has drawn on her own experiences of trauma to support other women in dealing with their own.

When it comes to living a life of faith in action, it is Gbowee’s undeniable role in the peace process in Liberia that showcases this most. She was a founding member and Liberian Coordinator of the Women in Peacebuilding Network (WIPNET). One night after working late, she was asleep in the WIPNET office when she had a dream of a voice commanding her to ‘Gather the women to pray for peace!’[ii]. She has since described how this was like hearing the word of God, but she couldn’t quite believe it – not because she questioned her faith, but because she questioned her own worthiness. As she states in her memoir, ‘I drank too much. I fornicated! I was sleeping with a man who wasn’t my husband, who in fact was still legally married to someone else. If God were going to speak to someone in Liberia, it wouldn’t be me!’[iii].

Despite these reservations of her own worthiness, Gbowee followed through with this calling. From the April of 2002, on every Tuesday at noon, Gbowee gathered women from different churches together to pray for peace. It wasn’t long until Gbowee began to feel like prayer without action wasn’t enough and she began to wonder what else Christian women in Liberia could be doing. It was around this time that Asatu Bah Kenneth, a Muslim WIPNET member who had been moved by the work that the Christian women had been doing, stated her commitment to the cause and pledged to engage the Muslim female community in the work of peace too – stating that ‘we will all work together to bring peace in Liberia’[iv].

From this moment an interfaith alliance between Muslim and Christian women was born. This was incredibly profound as Christian and Muslim women in Liberia had never worked together in this way before – and while it wasn’t always plain sailing (some Christian women worried that engaging with Muslims would dilute their faith) it proved incredibly important. One of the greatest impacts it had was that it allowed Gbowee and Kenneth to work together to reach the different spaces the other could not necessarily influence. The leader of LURD, one of the main rebel groups in Liberia, was a Muslim and Kenneth encouraged Muslim women to challenge their Imams to speak out against what LURD were doing. Similarly, Charles Taylor, the then Liberian President, regularly attended church, and Gbowee similarly encouraged Christian women to push their pastors to speak out against what Government forces were doing.

Aside from challenging their own faith leaders, Liberian Muslim and Christian women, led by Gbowee and a few others, began to engage in peaceful mass action. On the 14th April 2003 thousands of women from all across Liberia gathered on a field near the fish market in the capital Monrovia. This site was chosen as it was directly on Taylor’s route to and from work. Despite the danger they were in and the threat of arrest, torture, and even rape, the women stood there defiantly with banners demanding peace. They were careful to avoid being political – they would not take sides in the conflict. The only side they took was the side of peace. Liberian women from all walks of life continued to repeat this same action, week in week out. Aside from this mass protest, some of the women also took part in a sex strike, arguing that the men who did nothing to stop the fighting were just as complacent as those involved in the violence, and therefore they would not have sex until they saw ‘God’s face for peace’[v].

After a few weeks of repeated protests, Taylor did agree to meet with the women and, on 23rd April 2003, in what is perhaps one of the most moving and honest speeches I have heard, Gbowee addressed him directly. Her message, which didn’t pull any punches, was this: ‘the women of Liberia, including the IDPs, we are tired of war. We are tired of running. We are tired of begging for bulgur wheat. We are tired of our children being raped. We are now taking this stand, to secure the future of our children. Because we believe, as custodians of society, tomorrow our children will ask us, “Mama, what was your role during the crisis?”’[vi]

When peace talks began between Taylor’s Government and the rebel groups on the 4th June in Ghana the women of Liberia once again mobilised. They sent a delegation of women, led by Gbowee, to organise the Liberian community living in Ghana, to engage in peaceful mass protests outside of the venue where the negotiations were taking place. The message was the same as it had been in Liberia, that Liberian women demanded peace. However, during this period, Gbowee began to lose hope that this would be realised – as those involved in the negotiations did not appear to be taking it seriously. In her mind, they were treating it more like a holiday while they jockeyed for power. All the while the situation in Liberia was deteriorating, made worse due to the release of an international arrest warrant for Charles Taylor’s alleged war crimes in Sierra Leone.

The desperation Gbowee felt spurred her on to one of the most profound moments in the peace negotiations, when she mobilised thousands of Liberian women living in Ghana to take over and occupy the lobby of the venue where the negotiations were taking place. She instructed women to sit in front of the exits, to link arms, and to not let anyone through. In a desperate plea that was perhaps more divine intervention than she realised, she stated that if the people at home were starving and without water due to the conflict, she intended to hold all those involved in the peace negotiations hostage until they had finally come to an agreement. Gbowee eventually relented, but she warned that the women would return in greater numbers if the peace talks did not start to be taken more seriously. As she has described, ‘this marked the beginning of the end. The atmosphere at the peace talks changed from circuslike to somber’[vii].

After the peace deal was signed, Gbowee continued to work with and mobilise the women of Liberia, as she recognised that this was not the end of the journey, it merely marked the beginning of another chapter in the search for peace. She stated her frustration at the international communities failure to invest into social services that would keep young men from turning to violence and criticised the demobilisation efforts. She called for Liberian women to be part of this process, as ‘to outsiders like the UN, these soldiers were a problem to be managed. But they were our children’[viii]. When it came to ensuring democracy, Gbowee also thew herself into ensuring women had a place at the table – working tirelessly with some of her colleagues to ensure that women were registered to vote in the election and that they were able to do so on the day.

There are many aspects of Gbowee’s story and the work she has engaged in that inspire me and challenge me when I consider what it is to be a peacemaker and what it means to live a life of faith in action. The first is simply that Gbowee speaks about peace in a way that resonates with me, that goes beyond the focus of laying down weapons to recognising the importance of healing people and whole communities. This description she gives summarises this so well: ‘Peace-building to me isn’t ending a fight by standing between two opposing forces. It’s healing those victimised by war, making them strong again, and bringing them back to the people they once were. It’s helping victimisers rediscover their humanity so they can once again become productive members of their communities. Peace-building is teaching people that resolving conflict can be done without picking up a gun. It’s repairing societies in which the guns have been used, and not only making them whole, but making them better’[ix].

The second is that she is open about her own character flaws to the extent that she initially questioned that God was calling her to work for peace because of these. In addition, she is also incredibly open about the impact that the war, and her peace work, has had on her family. She doesn’t paint it as having been easy – she relied on her sister and her parents to raise her children while she was out working, her wider family is now scattered across the world, and she struggled with alcohol dependency. Yet, she never relented in her quest for peace.

However, perhaps the thing that inspires me most about Gbowee is that she was by no means acting alone. What the women of Liberia achieved they achieved together, through building bridges with one another, across tribal ethnicity, religion, and socio-economic divides. They showed the power of what can be achieved when people of faith (including those of differing faith) come together to demand peace. And they did it all in a non-violent, non-political way - with peace at the heart of their movement.

Today, Gbowee continues her peace-building work through the Gbowee Peace Foundation, which provides outstanding education and leadership opportunities to women and youth.