The Liberal and the Martyr 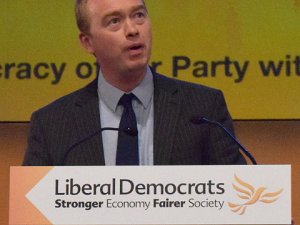 British parliamentary politics could not, given the bishops in the House of Lords, be accurately characterised as ‘secular’, but it is certainly godless. As such, theological events are a fairly rare occurrence. However, Tim Farron’s resignation, following the recent general election, is fascinating insofar as the leader of the Liberal Democrats locates his decision very firmly within his Christian commitments. For Farron, it has proven impossible to hold his position whilst maintaining what he sees as faithfulness to Christ. The speech is rhapsodic in its praise of Christianity, and yet this does elide that the point of controversy is not the Gospel itself, but Farron’s views on homosexuality and abortion.

Farron argues that liberalism’s strict division between the public and the private sphere means that his personal beliefs on moral issues are precisely that; personal, with no necessary corollaries in his programme for public policy. Therefore, the fixation on these beliefs by much of the media and the public demonstrates that such a politics is needed more than ever; “I seem to be the subject of suspicion because of what I believe and who my faith is in. In which case we are kidding ourselves if we think we yet live in a tolerant, liberal society.”

Is Farron Really a Martyr?

This is an appeal to the popular imagery of Christian martyrdom. Farron’s words conjures up the memory of the earliest Christians, innocent victims of a hostile pagan world, tortured or cast before the lions for their convictions. In this case, Farron’s death is not literal, but figurative; he claims he is being forced from the public sphere for his faith. The wider political context for this is the Liberal Democrat’s disappointing performance in the recent general election. Although many were confidently predicting a resurgence in support for the party (#FightBack) in the wake of the EU referendum and their firmly pro-Remain stance, despite some gains, this wave of support failed to materialise. If Farron has been made a martyr this election, it appears he may have taken his party with him.

However, this explanation for his resignation doesn’t quite stand up to scrutiny. Whilst he does have a record of supporting certain LGBT+ rights measures, it is not the consistent history he claims for himself, and so the claim that his personal beliefs have no effect on his politics is ambivalent at best. Moreover, Farron’s speech disregards the numerous Christian politicians of all parties, with varying positions on LGBT+ rights and the accompanying theological issues. At a time when the Prime Minister, a vicar’s daughter and proud Christian, is in negotiations with the DUP, a party built on Ulster Protestant identity, the claim that Christianity, even at its most conservative, is an obstacle in British politics is simply untrue. However, this martyrdom narrative, claiming that Christians are marginalised in public life is becoming increasingly prominent on the lips of the resurgent far-right, who wish to mount a defence of ‘Euro-Christian civilisation’ against the excesses of Western liberalism and the ‘threat’ of Islam.

The Trouble with Liberalism

As such, to take Farron’s claim that he has been victimised for his faith at face value is to perpetuate a narrative indistinguishable from that of those seeking to ‘return’ to a fictional white Christendom. He has sought to distance himself from those who would impose their faith on society at large, but in doing so he relies on a firm schism between the public and the private. The claim that faith and politics belong to two mutually exclusive spheres, and that the state should not interfere with individual liberty, is consistent with the classical liberal ideology he has so persistently advocated. The contemporary economy, Farron argues, from rapid growth of multinational corporations to the so-called ‘gig economy’, highlights the limitations of the individual nation-state. Rather than struggling to maintain regulatory power, government should encourage such developments so that greater opportunities for citizens might follow. Indeed, in his resignation speech, he went so far as to describe the Liberal Democrats as “passionate about […] free trade”.

This optimism about the contemporary economy is not reflective of the wider political mood. Since the crash of 2008, people have become more and more aware of the vast inequality in our society, and austerity has demonstrated that (neo)liberal politics lacks the resources to adequately respond to this crisis. An equally inadequate response is that of the far-right, who falsely attribute our social decay to the rejection of ‘Christian civilisation’ rather than the ravages of capital. The failure of Farron’s liberalism and his appeal to Christian victimhood can be drawn back to the same roots: the widespread rejection of the ‘Third Way’-ism that has dominated our electoral politics for decades. To blame the Liberal Democrat’s performance on Tim Farron’s religious convictions, whether one sees him as a bigot or a martyr, seems at best only a partial truth. If he is a martyr for anything, it is not God, but his insistence on a sterile liberalism that has proved itself incapable of articulating an adequate response to present conditions.

Farron’s appeal to a strict division between public and private spheres is even more baffling when one recognises that such a framework cannot accommodate the very faith he seeks to defend. To give a topical example, for the early church, martyrdom was a public witness to the faith, a performance of the truth of Christ’s crucifixion in the public sphere. That this was in some sense an active participation in the crucifixion meant that martyrdom was not merely victimhood, an unqualified embrace of suffering, but a new form of agency, located within what Talal Asad refers to as an ‘economy of action’ directed towards the most marginalised members of society:

“their public suffering made a difference not only to themselves […] as members of a new faith but also to the world in which they lived; it required that one’s own pain and the pain of                    others be engaged with differently.”

Here, martyrdom is not only itself a public activity, but part of a broader public practice of solidarity with suffering. If one were seeking the basis of a Christian politics, surely it makes more sense to transfer this practice from that of the individual martyr to a collective solidarity, rather than appealing to a passionless liberalism?

To take just one example, there are a wide range of issues that affect LGBT+ people far beyond merely formal rights, from migration to housing, from healthcare to policing. The unique ways in which LGBT+ people are impacted by these problems cannot be adequately addressed by an assurance of individual liberty – especially since the concomitant freedom of the market would intensify the roots of these issues. Rather, Christians might interpret these conditions through martyrdom as a form of public politics, a practice of attention to suffering. This is the basis of a solidarity which seeks to forge the pain of these communities into a form of agency from which radical political action might emerge.

Jonathan Murden is a Theology student at Durham University.

Tags:
Solidarity
< Back to all blogs