A Liturgical Perspective on Climate Change 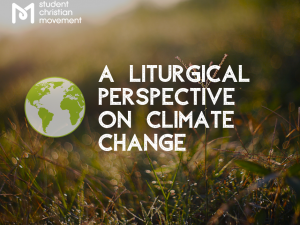 With the news we’re hearing about climate change at the moment, it’s quite easy to feel hopeless about the situation, and not without good reason: unless sharp reductions in emissions are made within the next few decades, we face the very real possibility that the consequences of climate change will be catastrophic. Already, we can see melting ice, rising sea levels, and devastating heatwaves. Many scientists are suggesting that we have already reached a point – or certainly will do soon – where the total temperature increase can no longer be limited to a comparatively ‘safe’ level. The sense of hopelessness that these stark facts often cause has raised several questions for me over the last few months. In particular, I have been wondering how theology might speak to what is ostensibly a scientific problem. How should climate change be understood theologically when preventative action may no longer be possible? How might we find hope, even in an apparently hopeless situation?

As I have been exploring these questions, I have found some particularly helpful insights in the Eastern Orthodox tradition. Alexander Schmemann, an Orthodox theologian and priest suggests that we must understand the world as “eucharistic” and “sacramental”. By this he means that all created things have been given to us by God so that we can know and live in communion with God. He argues that we have failed to understand the world in this way, instead regarding it only in terms of how it can be used to fulfil our needs and materialistic desires. According to Schmemann, this is original sin. This shows us that climate change is a profoundly moral issue. This morality is not just about whether we do our recycling or take public transport instead of driving (though we definitely should if possible!), but a much more fundamental issue of the way that we view the relationship between ourselves and the earth.

As an Anglican, I decided to look back at some theologians from my own tradition to answer this question. Rowan Williams, for example, argues that, when we take part in the Eucharist, we are not only participating in a ritual, but are actually transformed. We move from what he describes as a “pre-sacramental state”, in which we are uncertain about the God’s promise of provision, into a “sacramental” one, where our solidarity with God, each other, and the earth is renewed. In this new “sacramental” state we are assured that God can provide for our needs, and our renewed solidarity with the earth and each other encourages us to live in greater harmony with the rest of creation. In this way, our previously sinful relationship with the earth is restored and forgiven, though this is not a once-for-all event, but instead happens each time we receive the Eucharist.

And what about the hope I mentioned earlier? The Eucharist not only looks back to Christ’s death and resurrection, or at our sin in the present, but also forward to the future. As we are transformed in the Eucharist, and our relationship to the earth is restored, we are also sent out into the world to witness to this transformation. There is already a hope implicit in this, but that hope is incomplete, because the transformation of our relationship with the earth does not itself mean that climate change will be stopped or reversed.

So where does our hope come from? The Eucharist points us forward to the end of time, when creation will be restored. This is not just meant to comfort us, or make us complacent about the very real and serious problem of climate change, nor to excuse unsustainable ways of living. Living sustainably, and in a way that does not demand from the earth more than it can give, is part of what it means to recognise the sacramentality of all living things in a restored relationship with the rest of creation. However, we know that this kind of individual action, while important, is not enough to effect the kind of systemic change that we need, and this is why we need a greater sense of hope. This hope serves as a reminder that our current situation is not normal or inevitable, but that there is hope and potential for change.

Written by Liz Marsh, an SCM member. Liz has been involved with SCM since 2014, and she is currently studying for a master's in Theology at VU Amsterdam.

Eco-Living: Some practical tips...
Top Tips for First Time Protesters
Doing Enough? Activism and Protest as a Person of Colour