Longing, Desire, and the Pursuit of God 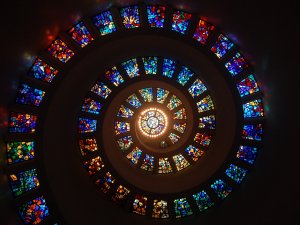 Today, as I write on 11 August 2016, marks 28 years of faith for me. In some Christian cultures, one might say that today is my “spiritual birthday,” marking my new birth, being “born again.” I have never quite felt comfortable with that terminology. One reason is the fact that birthdays are supposed to be happy, but for me, 11 August has had a shadow of sadness.

When someone is almost run down by conviction and love of God to the point of surrender, God is sometimes referred to as the “Hound of heaven.” This connotes the longing of a Father that simply will not take no for an answer...calling, beckoning, wooing even…to get the child to come home. The love in this is unmistakable; it is the relentless parent who never gives up.

For me, it almost seemed the reverse was happening. For about two years, I had been begging God to find me. I studied and tried out world religions, dated people in cults and created my own weird religion in an attempt to please God enough to enter His presence. Over the years on 11 August, I have been reminded of the incredible gift of walking in God’s presence, full of life, joy, peace and truth. Yet I have also wondered why my case was so difficult. Was I that undesirable?

These past 28 years have been spent slowly getting to know this God of love that I met. Initially this happened through the usual Christian methods. I went to church, read my Bible and prayed for myself and other people. There were opportunities for healing prayer, for serving the poor and telling people about Jesus overseas, and for getting involved in groups like Alpha at home. During one Alpha meeting, the leader had the participants imagine Jesus coming to the door of their hearts. Though I had welcomed Jesus long ago, I did the exercise with the others and was surprised to find myself not opening the door to allow Jesus in, but grabbing His hand and wishing to go out with him to serve and love…anywhere but ‘in’.

Instead, in that imaginative ‘house’ prayer, I found Jesus on the porch, waiting until I allowed him to come in. At various times, I have found myself in different rooms of the house, always choosing where Jesus could go. But there came a day, when in prayer, I found that Jesus had somehow transcended a locked door and left me outside of it. I knew something major was altering for me spiritually, and I felt scared and infuriated. As I prayed, I imagined sitting outside the door, removing my shoes and throwing them as hard as I could at the door that would not open. Jesus had freedom to do the changing work without my control.

The next time I prayed, I found myself back in the house. This time, the door Jesus had transcended was ajar and light was coming out from the room. I imagined walking into the doorway. As I entered, I found myself growing like Alice in Wonderland, standing there, huge and dumbstruck, surrounded by light. The prayer ended and I have never prayed the ‘house’ prayer again.

I was hired just a few days after that by a church looking for a “Liturgist for Worship and Arts.” My job included leading a prayer service once a week in which the community of believers that came utilized Centering Prayer, Lectio Divina, and Ignatian practices to usher us into a time of shared silence and contemplation. I also led retreats using these forms of prayer and more, all of which brought me further and further into a deep sense of the love of God. It seems the “Hound of heaven” might do some pursuing after conversion, especially through meditative and contemplative prayer.

All these years later, I find myself marveling at the gift of waiting and striving so hard to find the God that I love. Watching the Olympics recently, it occurred to me that the most inspiring stories are not of those who are naturally talented and well supported, but the stories of those with die-hard commitment derived from a journey wrought with hardship and perseverance. Seeking God for so long is not evidence of being an undesirable child, but of being a child who, after undergoing a honing process which drives in commitment, can continue to grow as she attempts to bring others deeper as well.

Written by Jamie Howard, PhD student in the Anthropology of Religion at the University of Durham.