Looking Towards a Future with No Genocide 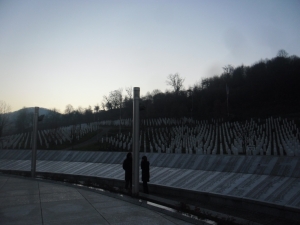 Holocaust Memorial Day (HMD), which falls every year on the 27th January, is a day in which we remember the estimated six million Jews killed during the Holocaust, along with the other groups who were targeted as a result of Nazi persecution, including but not limited to those who were disabled, members of the Roma and Sinti community, Slavic people, black people, those who identified as LGBTQ+ and members of the political opposition.

Aside from remembering those who were persecuted by the Nazis, HMD is also a time in which we remember those who have lost their lives in the genocides that came after the Holocaust. While the term ‘never again’ was termed by the UN following the end of World War II, this unfortunately has not been reflected in reality. Since 1948, four UN recognised genocides have taken place, first in Cambodia between 1975 and 1979, then in Rwanda in 1994, Bosnia in 1995, and finally, genocide began in Darfur in 2003 and is still ongoing to this day.

The fact that genocide has occurred so frequently since the ending of the Holocaust shows just how important it is not just to remember the horrors of these events, but to learn from them too. The theme for this year’s HMD is ‘One Day’, with people being encouraged to engage with this theme in several ways, each of which suggest different ways we can remember and learn the lessons of the Holocaust and the subsequent genocides that have happened. One way in which people are being encouraged to engage with this theme is through thinking about ‘one day in the future’, looking  ‘ahead to ‘one day with no genocide’’[i] and examining what we need to achieve to get there.

For me personally, the importance of not only remembering but learning from the horrors of the Holocaust and subsequent genocides in order to create ‘one day with no genocide’ became apparent to me in December 2015, when I travelled to Bosnia with the organisation Remembering Srebrenica. The purpose of this trip was to learn about the genocide that occurred at Srebrenica (which had been declared a UN safe zone) from the 13th to the 19th July 1995. Throughout these six days, Serb forces systematically rounded up and executed 8,132 Bosnian Muslims. The majority of those killed were men and boys, although the youngest victim was a two-day old baby girl. Aside from learning more about the genocide, the trip was also designed to educate us about the wider persecution faced by the Bosniak people during this time. Such persecution included forced detention in concentration camps; the systematic use of rape as a weapon of war; ethnic cleansing and mass killings in areas beside Srebrenica; the siege of Sarajevo, the longest siege of a capital city to happen as a result of modern warfare; and the deliberate destruction of buildings of historical and cultural importance to the Bosniak people (in effect, cultural genocide).

One of the main methods for learning about the genocide and the wider persecution of the Bosniak  people was to meet with and hear the first-hand accounts of those who had lived through these events. These testimonies, which were both impactful and harrowing, ranged from one man’s experience of living through the siege of Sarajevo whilst serving in the Bosnian army as a teenager (describing how, in a matter of days, he went from being an ordinary 19-year-old, to joining the army and facing what at the time was the second most powerful armed force on planet), to another man’s experience of surviving the death march after fleeing Srebrenica (although he lost many members of his family along the way, including his twin brother), and finally hearing from the Mothers of Srebrenica, a remarkable group of women who lost their sons and husbands in the genocide and have been fighting for justice ever since. In most cases these women were still trying to find parts of their loved ones remains, as ‘Serb Forces participated in an organised and comprehensive effort to conceal the killings and executions of the Bosnian Muslims of Srebrenica by digging up and reburying, in isolated locations, bodies exhumed from mass graves’[ii]. This meant, even when remains had been found and identified, these were often incomplete. As one mother explained, she gave birth to a whole baby but buried only an arm.

Hearing these stories helped me to realise how incredibly important it is on HMD that we not only remember and learn from the Holocaust, but all subsequent genocides. When we consider what has happened in the 77 years since 1945, it becomes evident that despite the world uttering the words ‘never again’, the demonisation and persecution that allowed the Holocaust to happen persists. Moreover, the case of Srebrenica reminds us that genocide is not something that happens ‘elsewhere’. Afterall, 1995 marked the 50th anniversary of the liberation of Nazi Camps across Europe, but in the same year the Srebrenica genocide took place. It remains the largest atrocity to happen on European soil since the Holocaust.

If we are truly to look forward to ‘one day with no genocide’, then it is not enough to say ‘never again’. Rather, we must really listen to and learn from those who have experienced the horrors of the Holocaust and genocide and we must be unafraid to speak out when we see people being persecuted, demonised, or othered. I am not so naïve as to think this will be easy. Such othering can happen unconsciously in our place of education, work, and even in our churches or places of worship. We may even unconsciously do it ourselves. Yet, if we want to work towards a future with no genocide, then we must be willing to learn from the past, be open to hearing the stories of survivors, be unafraid to question the language or biased assumptions held by others and by ourselves, and we must welcome respectful and open debate about how, as a society, we interact with each other. Only by doing so can we being to work towards a day in which genocide is a thing of the past.

You can find a full list of Holocaust Memorial Day events happening around the country here.

You can find out more about Remembering Srebrenica here.