Loving the earth means being good stewards of creation 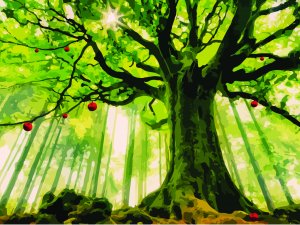 In 1967, Lynne White Jr published an article entitled The Historical Roots of Our Ecological Crisis, in which he argued that the Judeo-Christian view of nature and the natural world had contributed heavily to the environmental crisis. The paper kickstarted a new subdiscipline within the study of theology, known as Eco-theology. Eco-theology is the study of humanity’s relationship with the natural world, and looks at this relationship through a theological lens.

Our environmental problems have only got worse in the fifty years since Lynne White Jr wrote his paper. The statistics given to us on the news are no longer predicting conditions in a time so far away that we cannot imagine it. It is a common argument among advocates for environmental issues that we should act now for the sake of our children and our grandchildren; we may not live to see the consequences of our actions, but they will affect the generations that follow us. This is indeed a valid argument, but eco-theologians often also look at the responsibility we have towards the natural world simply because of our relationship with the earth itself and its inherent worth.

Sometimes it can be unclear just what we can do to prevent the dire consequences of climate change. After all, the environment has changed massively over the billions of years of the earth’s history, and many times before humans were even around. If that is the case, then we might be believe we are justified to conclude that climate change has nothing to do with us – that it’s not our fault. And if it isn’t our fault, then why should we be the ones responsible for stopping it?

The answer takes us back to Lynne White Jr, the eco-theologians, and the Creation narrative in Genesis. I wrote my undergraduate dissertation on being ‘in the image of God’ and what that means for humanity, and concluded that it meant that humans are the stewards of Creation; we bear the responsibility for looking after the world which God has given us.

If we do nothing, then ultimately the consequences have no massive impact on the universe. Humanity and other species on the earth will die out, possibly to be replaced by new ones. The changing environment doesn’t have to mean the death of life on Earth – after all, Earth has experienced five mass extinctions in its history and life has still gone on after every single one. If climate change does lead to another mass extinction, then it is all very likely that life will still go on. Thus, we don’t really have anyone to answer to if we make no attempt to prevent the worst, other than God.

In that sense, why should we strive for something at which we might fail? I would say that the answer is love. Stewardship in our current understanding is often related to hierarchy, and indeed this is a valid point, but hierarchy is often seen as a ladder of power, with the higher echelons ‘lording’ it over the lower. We can instead choose to view stewardship not as a position of power, but as a position of love. We are not merely called to look after Creation as a foreman looks after his miners. We are called to love the Earth we have been given. This is what it means to be stewards of Creation.

Ellen studying for a research Masters in Theology at Exeter University. Another SCM student, Caitlin Wakefield, has also written on the theme of our SCM campaign 'loving the earth' here. If you would like to write about what loving the earth means to you, please email Ruth: ruth@movement.org.uk

Tags:
Loving the Earth
Climate Change
Environment
< Back to all blogs