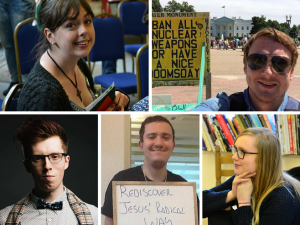 I’m Simone (pronounced see-MOH-neh) and I’ve just completed my BSc in Genetics at the University of Essex, where I also founded the Progressive Christians (SCM) group, and will be doing a research-based MSc this autumn.

My faith background is a mixture of non-conformism, quakerism, process theology and mimetic theory. Born and raised in Italy, I was baptised at St Andrew’s Church of Scotland in Rome and I have been attending a liberal United Reformed Church congregation in Colchester.

Faith informs who I am and what I do. It is not a clean, perfect, #blessed kind of thing; it is messy, confusing, frustrating, and includes a small amount of swearing at times, and so much more. It makes life challenging in that it challenges me to live by a higher standard, Jesus’ Way, a standard to which I often fall short, but the best standard one can have nonetheless.

The Portfolio: Science and Religion

Why a Science and Religion portfolio then? It’s not a vanity project, but something I think is fundamental to the survival of Christianity in the 21st century. The Church has gotten things wrong, just like Jesus’ disciples did at times, and in some ways we have been through a slow and painful process of healing and reconciliation, but society as a whole does not always see that. When looking for a “Christian point of view” the media often pick the loudest, most controversial voice, because that’s what sells. Ask the unchurched how they usually perceive Christians and you will get a lot of adjectives that those very same people would never use for Jesus. It is our task as members of the one Body to use our own gifts as students of different subjects to show that God is still speaking today, and in Jesus his message is as relevant to the world as it was in the first century.

This, I believe, does not only mean asking academics to provide accessible group materials on all the “controversial” (GMOs, gene therapy, cloning…) and misunderstood (quantum physics) topics, but also using the insights of all branches of science to inform and kindle our own theology and our understanding of the wonderful puzzle we are part of.

The latter may be more difficult, it might require a certain level of deconstruction before we can build up a theology for the 21st century and beyond, but it is a worthy task, the Church’s duty and (quite possibly) her salvation to do so.

I have many who have shaped my faith and whom I have learnt from. René Girard has certainly played a very important role in my latest conversion experiences. Furthermore, I see in him a symbol of what the future of the Church might look like: a person – no, an academic – who embarked on the quest of understanding reality and humanity by studying humanity’s stories, and was somehow so lucidly aware of the radical otherness of the Gospel and of Jesus that he came out of his  very methodical and scientific anthropological research a new person, a changed person, a preacher of peace. He opened the Bible as a researcher on myth and literature, and closed it as a disciple, bringing the Gospel with a whole new freshness to many, including some who thought they were already Christian.

Tags:
General Council
Theology
< Back to all blogs