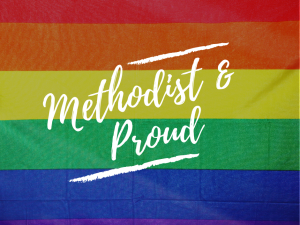 I am a Methodist. I love the Methodist Church, and one of the things I most value about being a Methodist is our connexionalism - the idea that we are all interdependent. Despite the fact that the Methodist Church in Britain is not a member of the United Methodist Church in America, we are all part of one big global Methodist family and so I have been saddened by the recent discourse in the UMC on LGBT* clergy and marriage. I am not so upset at the plans that they adopted or even the draconian way in which they now intend to deal with LGBT* ministers, but in the lack of grace in the language that has been used to talk about LGBT* issues and the fact that it has apparently become acceptable to tell LGBT* people they are “unsaved”, “unchristian” and ultimately unwelcome.

I knew I was gay from a young age, but very early on I decided I would ignore it. At best I thought it was something that I had to pretend wasn’t there - at worst it was something I should feel deeply guilty about. It is painful to remember how ashamed I was about being attracted to men, how dirty I felt for having feelings that were, in my mind at least, so obviously "unchristian". At one stage I was even convinced that God was punishing me for some other sin by making it so I could never have a relationship, so strong was the internalised anti-gay rhetoric. Despite all of these conflicting feelings I always felt called to active ministry in some way, and so I thought I had to choose between my ministry and my sexuality. This is just one of the reasons that the current debate in the UMC is so upsetting for so many, and feels like a step in the wrong direction.

Studying theology at university I was fortunate enough to be able to work through these issues. My theology became more liberal overtime, but it was my love for Scripture that ultimately changed my views on sexuality and helped me realise that God is for gay people. Through my studies I learned that scripture does not actually ban same sex relationships when read in its context, and it certainly does not condemn faithful, loving relationships. The Bible is clear that, ‘God is love. Whoever lives in love lives in God, and God in them’.

I am now at the point where I have worked through many of the issues that I had regarding my own sexuality, and am happy to say I have a partner whom I adore and whose love for me teaches me more about the love of God than any study. I am so grateful to have Matt by my side in everything I do, supporting me and showing what committed and faithful love is.

So, what happened to my vocation? I am exploring the call to ordained ministry in the Methodist Church in the knowledge that my sexuality will not preclude me from candidating (thanks to some very brave people who have gone before me and fought that battle) but I'm currently a layworker with two very different appointments in the Methodist Church. I am also training to be a Methodist Local Preacher. I now serve God and live out of my authentic identity - in fact I don’t see how I could do otherwise! God has called me to do the work I do, and he has called me as I am, not as somebody who is in denial about who they are.

That does not mean it is always easy! I still sometimes let people who claim I’m unchristian, or worse, claim that I have no salvation, upset me. But as a rule I remember that God is love, and that God wants me to be the person I was made to be.

Written by James Blackhall. James was a part of SCM Leeds and studied Theology and Religious Studies at Leeds University. He is now a Methodist layworker and Local Preacher.

Learning To Be My Whole Self
Lesbian Love as Vocation: My Journey as a Roman Catholic Lesbian