The Mexican Day of the Dead is a Celebration of Life! 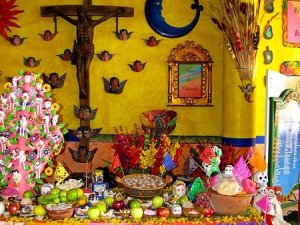 In the United Kingdom, several Christian denominations traditionally mark All Saints' Day on 1st November, remembering the saints and martyrs who dedicated or sacrificed their lives to Christianity. Interestingly, other countries in the world commemorate the same day in a very different fashion. Mexico has a unique celebration called ‘the Day of the Dead’.

The Mexican Day of the Dead has deep cultural roots and can be traced back to the time before the Spanish conquest. The indigenous groups of Central America, such as the Aztec, Maya, Purépecha, Nahua and Totonac, considered that death was not the end of a person’s existence, but a natural phase in life’s long continuum. These cultures considered it disrespectful to mourn the dead and preferred to keep alive those who passed away in memory and spirit. Indeed, it was firmly believed that dead people were still part of the community.

With the passage of time and the arrival of the Christian faith, the celebration of this tradition was adapted and merged into Christianity, and nowadays it takes place on 1st and 2nd November, coinciding with All Saints’ Day and All Souls’ Day in the Catholic calendar.

The most emblematic item representing the Day of the Dead is the memorial or ‘altar’ which is built to welcome the spirits of loved ones who come back to the realm of the living.  Some altars are set upon the tombs of relatives in cemeteries; however, the majority of people prefer to install them within their homes. They are tables commonly decorated with orange marigold flowers and colourful paper. Altars are loaded with water to quench thirst after the long journey taken by those who passed away. Traditionally, altars have the favourite food of the dead relatives, so they can enjoy delicious cuisine, fruit, and bread. They also incorporate religious artefacts like candles, crucifixes and statues and images of saints. The 2nd of November is specifically the day for dead children, so toys and sweets are brought for the ‘little angels’.

Unlike Halloween, the Day of the Dead is not associated with scary spooks or frightening entities. Indeed, it is a joyful and fun day as death is represented in small sugar sweets in the shape of a skull. The most traditional ones even have a small label in their forehead with the name of those who are still alive.

Many Mexicans learn from early childhood that life is brief and has to be respected. By not fearing death, Mexicans are more able to enjoy their time living. A collective celebration of death helps people appreciate that a positive, compassionate attitude that is associated with Christ’s love should ideally be maintained throughout the year. All in all, it is argued that this tradition has survived over the centuries because it offers the opportunity of having a brighter idea about living in this world. In other words, for Mexicans, the Day of the Dead is a celebration of life!

Marisol attends Selly Oak Quaker Meeting in Birmingham. She is from Mexico but has settled in the UK with her British husband and son. An altar will be set up by the Mexican community living in Birmingham in Martineau Gardens from 31st October to 2nd November 2017, for those who are interested to join in with the festival!

Tags:
Catholicism
< Back to all blogs