Misreading the parable of the talents 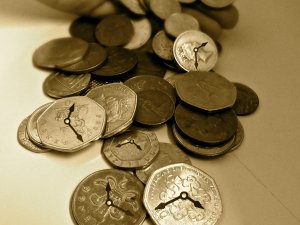 There are few passages in the Bible that I feel more strongly about than the parable of the talents. This is partly because it is so often interpreted in a way that means it can be used to justify ideas that are contrary to Jesus’ teachings and to much of the Bible. I am convinced we have been reading the parable “upside down”.

If you’re unfamiliar with the parable, or can’t remember it all, you can find it in Matthew 25,14-30 and in a slightly different form in Luke 19,11-27. The gist of the story is that a rich man goes on a journey and leaves his servants to look after his money (Matthew uses the term “talents”, which was a unit of currency). On his return, he finds that two of them have invested the money and gained interest. He rewards them.

The third servant has hidden the money, gaining no interest. He tells the rich man that he was afraid of him because “you are a harsh man, you take what you did not deposit”. He gives him back his money. The rich man throws him out and, in Luke’s version, follows this by having his enemies killed in front of him.

Christians usually suggest that the rich man represents God. Nineteenth century clergy said it showed God will reward those who invest money well. Now it’s more common to be told that it means we will be rewarded if we put our skills to good use (this is helped by the convenient double meaning in English of the word “talents”).

Try reading this story to someone who is unfamiliar with it, without commenting, and ask them with which character they most identify. When I have done this, the response has been “the third servant”. He seems to be treated appallingly harshly and yet he has the bravery to speak truth to power – “you take what you did not deposit”.

Why are we so keen to equate the rich man with God? What does it say about our theology if we assume that a rich and tyrannical figure must represent God?

Jesus constantly sided with the poor and marginalised, extending his love to all and making clear that repentance for the rich meant a change in the way they used their money. Furthermore, it is unlikely that a first century Jewish teacher such as Jesus would have promoted usury.

What if Jesus intended the third servant to be the hero of the story? He tells the rich man the truth about himself and refuses to collude with his unrighteous moneymaking.

The parable thus becomes a comment on the sins of inequality: “to all those who have, more will be given; but from those who have nothing, even what they have will be taken away”.

It seems that this interpretation is becoming more common among biblical scholars, although I have sadly never heard it preached in church. For a more thorough examination of the parable from this perspective, I recommend Lloyd Pietersen’s book, Reading the Bible After Christendom (Paternoster, 2011).

I am not suggesting that there can be only one meaning of this (or any other) parable. If Jesus had wanted only to issue straightforward instructions, he would not have told parables. They are meant to make us think. My point here is about what attitudes and assumptions we bring to the reading of the Bible. Do we expect to see God identified with the powerful or the powerless?

The “traditional” interpretation of this parable is positively harmful. Christian investment banker Jeremy Marshall uses it to argue that “banking is a biblical principle”. We cannot know just how much financial exploitation has been defended on the basis of this misread parable, but it’s certainly played a part.

This post first appeared on Symon Hill's blog, which you can read here. Symon is an associate of the Christian thinktank Ekklesia. His work has appeared in the Guardian, Morning Star, New Internationalist and New Statesmen, among others.

Tags:
Jesus
The Bible
Christianity
< Back to all blogs