Moving Away From Fire and Brimstone 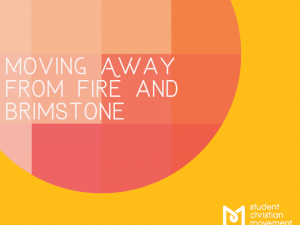 When I was a teenager, I remember walking through Birmingham city centre and passing two groups of religious evangelists. One group were shouting at passersby, talking about hellfire and brimstone. The other group were engaging people who approached them in conversation.

Guess which ones were Christian?

Often those of us on the liberal side of the church can view evangelism with a mix of disdain and trepidation, assuming it is all manic street preachers and anti-LGBTQ+ rhetoric, focusing on precisely who is going to hell (and sometimes, that can boil down to everyone). I know I've viewed it as such in the past, and I still feel uncomfortable with talking about my faith sometimes. But this can make the problem worse, because if we don't speak up people might only encounter Christianity as someone shouting about judgement, hell and damnation in the street, rather than having the opportunity of being welcomed into a Church community (which is inevitably a much more difficult prospect for people of colour, LGBTQ+ people, disabled people, women and other marginalised groups, who may find explicit or implicit exclusion in mayn of our churches.)

So, if there is a clear need for evangelism that isn't fire and brimstone, what can we do? As individuals, letting our faith shine through our actions is important. Whether that's volunteering at a homeless shelter or a food bank, or being openly Christian in a secular workplace, that can sometimes be more revolutionary and radical than it sounds. While people might not remember it as a distinctive event in the same way as they remember louder, more obvious forms of evangelism, it permeates. I realised how important this was when someone once said to me 'atheists like us' - I'd never explicitly said that I wasn't an atheist, and I told myself that this was just because the topic of religion hadn't really come up at all. Since then I've tried to make sure it always does, somehow.

What, then, can churches do? In the village I live in, the Methodist church is a great example of this 'quiet evangelism' - it runs a cafe once a week where people can buy cheap tasty food, and I know of other churches of all denominations that are involved in things like the Good Food Project. Sharing good food and sharing the good news can, and perhaps should, go hand in hand.

Taking inspiration from the Middle Ages, many wealthy women commissioned prayer books and some monasteries made beautiful illuminated Gospels due, at least in part, to a belief that these artefacts of faith should be beautiful. Often there was real gold in the illuminations, and even centuries later, we can see something of the effort (and cost!) that must have been attached to them. I am not suggesting that we all become manuscript illuminators, but rather that sometimes we can forget that ritual and religion can be beautiful, and perhaps evangelism can be too. This might help steer us away from the stereotype of someone shouting in the streets to one of love, genuine concern and joy.

Tags:
evangelism
< Back to all blogs