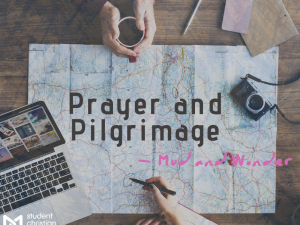 On the 24th March 2018, I found myself standing with my bare feet caked in gooey mud, in the middle of a vast plain of sand and mudflats, following a straight line of wooden poles stretching far into the distance. I was halfway across the Pilgrim’s Way, stretching between the coast of Northumberland and Lindisfarne (Holy Island).

In about AD 731, Bede the Venerable writes that ‘as the tide flows and ebbs twice a day, [Lindisfarne] is enclosed by the waves of the sea like an island; and again, twice in the day, when the shore is left dry, becomes contiguous to the land.’ (Ecclesiastical History of the English People 3.3). Today it is no different, and a few hours after we are finished, the tide covers the causeway again.

Lindisfarne has been an important site for Christianity in England since the 7th century AD, and while a tarmacked road was constructed 65 years ago, the route taken by the pilgrims of old remains. In AD 898, eleven years after the death of St Cuthbert, monks discovered that his remains had not decayed. A shrine was established, and Lindisfarne became the most popular place for pilgrims in the region. While his relics were eventually moved to Durham, pilgrims continued to visit St Cuthbert’s cenotaph, and people still cross over for many reasons today; for myself, the occasion was a university retreat.

We caught a bus from our accommodation on Holy Island to the starting point of the Pilgrim’s Way. As is the tradition, I removed my shoes and socks, and we began to walk past the endless poles, separated only by a couple of stilted platforms (for anyone caught out by the sea).

Walking across the landscape allowed me to focus on the beauty of the natural world: from the hills of Northumberland visible behind us to the island ahead. The sky appeared especially vast, with a few clouds dotted across it, and the sand seemed to go on forever. The view is largely similar to that which pilgrims would have seen so many centuries ago. I could just about make out the (now ruined) monastery in the distance, and I wonder whether those pilgrims would have felt the same sense of awe that I felt on the journey. In some small way, on pilgrimages like these we can gain a connection with people from centuries ago.

Psalm 104:5-9 reminds me of this sense of beauty and wonder. Whilst the passage speaks of the boundaries between the seas and the earth, I can also see beauty in the way that the causeway at Lindisfarne gradually switches between being part of the sea and then the land, combining the beauty of both.

Even though the mud stuck to my feet, a feeling of wonder stuck in my mind.

Tags:
Prayer
Pilgrimage
< Back to all blogs