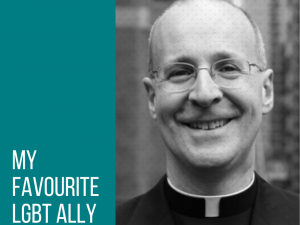 LGBTQ+ Roman Catholics have long been a thorny issue for the Catholic Church. Though it theoretically upholds that we “must be accepted with respect, compassion, and sensitivity" and "every sign of unjust discrimination in their regard should be avoided” (see Catechism of the Catholic Church, 2358), it is made explicitly clear that so-called “homosexual acts” are “acts of grave depravity… [they] are intrinsically disordered… Under no circumstances can they be approved” (CCC, 2357). Such conflicting messages - and harsh, antiquated wording – mean many straight, cis-gender Roman Catholics do not practice what the church technically commands in CCC, 2358. This can make life unbearable for many LGBTQ+ Roman Catholics, creating tension between one’s faith and one’s relationships.

While I (a lesbian Roman Catholic) am less conflicted about these two aspects of my identity than most LGBTQ+ Roman Catholics that I’ve heard or read about, it sometimes feels like one has to choose between the church and the LGBTQ+ community. Such feelings are compounded by the fact that there are few allies within church hierarchies willing to speak out in our support. A notable exception to this rule is Fr. James Martin SJ, an American Jesuit priest and editor of the ‘America – The Jesuit Review’ magazine.

Ordained 20 years ago, Fr. James is firmly pro-life in the true meaning of the word: upholding not only the rights of the unborn child, but also of marginalised groups – particularly refugees and the LGBTQ+ community. Fr. James is a strong advocate for LGBTQ+ inclusion within the Roman Catholic Church. An eloquent writer, as well as his editorial work he has an active public Facebook page and published a book in 2017, entitled Building a Bridge: How the Catholic Church and the LGBT Community Can Enter into a Relationship of Respect, Compassion and Sensitivity.

Whilst Fr. James has been a long-standing ally of the LGBTQ+ community, this book and the talks he gave – and continues to give - based on it continue to attract polemical views with the church. For those LGBTQ+ Catholics (and their families) struggling to survive in the church, it has been a welcome change from the usual narratives they have encountered. Yet for staunch traditionalist Catholics, it has caused ‘outrage’ and ‘scandal’, as they perceive it to be going directly against Church doctrine and teaching. (It does not at all: the book bears the Imprimi Potest from Fr. James’ Jesuit Provincial Superior, proving that it is ‘in line’ with the Church.) Fr. James has had invitations to talk rescinded as a result of the threats of boycotts or demonstrations at said talks; that has, however, not stopped him in the slightest. Indeed, he says in the revised and expanded (2018) version of the book: “the hateful comments and personal attacks were always put in perspective after just a few minutes with LGBT Catholics and their family members” (p.7).

While he talks of building a bridge between the Church and the LGBTQ+ community (which are often viewed as polar opposites with little to do with one another), Fr. James is firm that the onus is on the Church – not the other way around – to reach out and change its ways. He points to Jesus’ example of ministering and loving the marginalised. He also attests to the fact that there were probably LGBTQ+ people among those canonised to sainthood by the Church (without specifying names), as well as renowned Church historical figures such as Henri Nouwen. He also states that many of those living consecrated lives within the Church are chaste, celibate LGBTQ+ people, and that “[s]ome of them are the holiest people I have ever met” (p.43).

Fr. James is very clear: our Church must do better at attending to the spiritual and pastoral needs of LGBTQ+ Catholics. I echo his rousing words when he wrote “[t]he Church is invited to both proclaim and demonstrate that LGBT people are beloved children of God (p.43), and am one of several LGBTQ+ Catholics worldwide who are grateful for Fr. James’ ministry.

Written anonymously. If you would like to contribute to our LGBT+ blog series this LGBT history month get in touch at ruth@movement.org.uk.