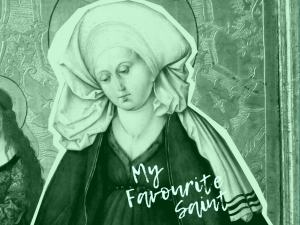 Since moving back to my hometown in Germany, I’ve been reminded of a local Saint who was always in the background of my childhood. Her story is often taught in schools, and her image and name can be found on various regional products and businesses. However, I never really thought about her much until I returned. Since rediscovering her, I was reminded of the relevance her story has for the modern world.

Elisabeth von Thüringen, more commonly known as Elizabeth of Hungary in the English-speaking world, was a Hungarian princess who married the Duke of Thüringen (Thuringia) in Germany. She was known for her piety and humility. She is particularly admired as a saint of the common people because of her engagement with the poor and needy.

Elisabeth came to Thüringen as a young child to be raised by the family of her future husband. Her marriage was, as was common practice for nobility, more business transaction than anything else. Due to the untimely death of her fiancé, her status was uncertain, and the family considered sending her back to Hungary and looking for a better match for their second son and heir. However, she went on to marry the new Duke and became Duchess of Thüringen. As Duchess, she became well-known for her charitable engagement, founding numerous hospitals and distributing alms to the poor. When her husband died, his family did not take kindly to her spending their money on the poor. There are some conflicting legends about this time. Some say she was driven out by her mother-in-law, others say she left voluntarily out of moral protest. Either way, she eventually left the family to become a Third Order Franciscan, one of the first Franciscans in Germany, and cared for the sick at one of the hospitals she had founded until her death around the age of 24.

Throughout her short life, she remained faithful to Christ’s teachings of humility and charity. Despite knowing it would place her at a disadvantage, like St Francis before her, she chose to put the needs of others above her own. She serves as an example of someone who knows that her position in life could be used to improve the lives of others.

Her refusal to be taken in by the power machinations and greed that surrounded her at court perhaps encourages us to look at the way we interact with power today. She reminds us to consider whether we place too much stock in the importance of manmade rules that are driven by income and hoarding. What do we actually gain from material wealth and is it consistent with Christ’s message? We also need to ask ourselves “How can I, personally, with the position I have in life and the opportunities available to me, make a positive difference in the lives of others?”

Elisabeth’s story is a simple one. She wasn’t a great mystic or a theologian, but simply a faithful follower of Christ, just like any of us can be, and that is what is most inspiring about her. It’s no wonder the devotion of the Thuringian people to her has survived even into the modern age.

To read more about Elisabeth and her life, you can read her entry in the Catholic Encyclopedia here: http://www.newadvent.org/cathen/05389a.htm