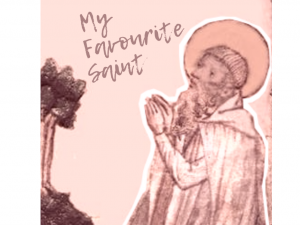 The North-East has a rich history of saints: Cuthbert, Oswald, Hild, Bede, Aidan. Among this great cloud of witnesses is St. Godric of Finchale, a hermit who lived for sixty years beside the River Wear.

Godric was born in Norfolk, in 1065, to humble beginnings. He spent his youth as a merchant mariner and very much lived the life of a sailor. During one voyage he visited the Island of Lindisfarne and while there he encountered St. Cuthbert — St. Cuthbert who by this time was long dead and interred in Durham Cathedral. This experience led him to renounce his former life and commit himself to God. After making pilgrimages to Santiago de Compostela, Rome and Jerusalem, he returned to England where he lived as a Hermit outside Durham. Godric was said to have supernatural visions and an ability to know about events hundreds or thousands of miles away. This caused many people, including Thomas Beckett and Pope Alexander III, to seek his counsel. Godric was a noted hymn writer and wrote the oldest songs in English for which the original musical settings survive — music, he claimed, that was taught to him by the Virgin Mary. Godric is perhaps best remembered for his kindness toward animals. It is said that his hut was a place of shelter for animals seeking refuge from hunters and the weather. After a long illness, Godric died on May 11, 1170. His tomb became a shrine where many miracles were performed. Like many medieval saints, Godric was never formally canonised. Instead his saintliness was attested to by those who knew him and his story continued to be told by the monks of Durham. Today the ruins of the abbey that was built on the site of Godric’s shrine is in a caravan park.

What I appreciate about St. Godric is what I appreciate about spiritual writers like Thomas Merton. By choosing to live as a hermit, he did not abandon the world. Instead he used his insights to help others and found a way to live in harmony with nature. Godric is someone who took time to find his sense of call; a person who first travelled the world in search of adventure but who found their vocation beside the River Wear. In this way Godric reminds us that a saint is someone who finds the place where God is calling them to be and who faithfully lives out their vocation there.

Written by Ross Jesmont. Ross is a Friend and Member of SCM, who is currently studying for a PhD in theology at Durham University.