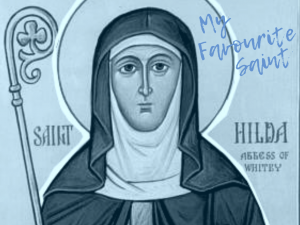 One of the advantages of studying Christian monastics from the medieval past is that you end up with a long list of favourite saints! One of my favourites is St Hild, abbess of Whitby, trainer of bishops and patron of artists. She lived in the seventh century and her life is briefly documented in Bede’s Ecclesiastical History. Most famously, she presided over the Synod of Whitby. In iconography, Hild is often depicted carrying a church and a staff. Appropriately, her feast day is the 17th or 18th November - I’m writing this on the 15th, so now is the right time of year to focus on her! Perhaps surprisingly for a member of the Northumbrian royal family, little is known about her life, but she still serves as a reminder to me and to many across the world.

Hild (also later known as Hilda, the Latinised version of her name) is known as a patron saint of learning and culture - so very appropriate for SCM, as learning is something we all have in common. According to Bede, she was responsible for the training of five bishops at Whitby (a double house of men and women) and she also discovered the poet Caedmon. Not only was her commitment to and talent for teaching others well-known, she was a highly respected woman, and not only by those under her care - she gave advice to Aidan and even asked the Pope directly to excommunicate Wilfrid, who might well win the award for the most irritating Anglo-Saxon!

More recently, her later life has been a source of strength for me - for the last few years of her life, she, like the later medieval mystic Julian of Norwich, suffered from an unnamed illness. I often pick up a copy of Julian’s Revelations of Divine Love when feeling down about my health, and I only wish we had some of Hild’s own words! She does not appear in many contemporary sources, but Whitby has taken on new life (it’s also the setting for part of Dracula!) and as a powerful woman with a lifelong commitment to education and to her faith, Hild has so much to teach us still.