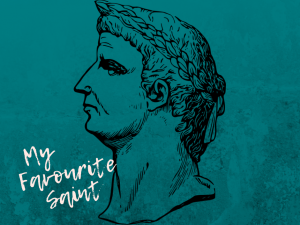 Porphyrios was a performer in the imperial court, who acted out comic scenes for the amusement of the emperor and his guests. One year, for the emperor’s birthday, he decided to perform a mock Christian baptism; the small persecuted community’s odd customs made prime material for comic value. He recited a form of the baptismal liturgy, with some crude remarks added to encourage the onlookers’ laughter. Entering the faux-font, he said, “The servant of God Porphyrios is baptised in the name of the Father, and of the Son, and of the Holy Spirit.” He immersed himself in the waters, and when he emerged he donned the white robe that was customary for the newly baptised and announced, “Now I am a Christian.”

The crowd laughed at the routine, but soon became confused. Instead of continuing with his previous mockery, Porphyrios began to preach Christ in earnest to the emperor and his guests. His mock baptism and fake confession had – somehow – effected a real changed in the actor. The baffled and enraged emperor ordered that he be beheaded – the man who moments before had merely played at Christianity now went to his death for it.

Christians in Britain today are increasingly concerned with the problem of doubt. Often doubt can seem like a failure of the spiritual life, something that we ought to overcome if we are to be good Christians. In parallel with this, I have had several conversations with non-religious friends who say they would like to believe but do not know how. Faith is something that people seem now to struggle with in a different way than the general frustration of immediate gratification it has always involved. Leaving aside for the moment the social and historical origins of this phenomenon, we might ask what the story of St Porphyrios might teach us.

Not even ‘ye of little faith’, St Porphyrios was not a believer at all. And yet the ritual act was enough to enact a transformation of his life – a transformation so great he was willing to give his entire life for it. It is understandable in the midst of doubts the life of faith can seem like mere habit, a mere assemblage of lifeless objects (I am Orthodox, part of a fairly ‘cluttered’ tradition, featuring icons, prayer ropes, and as many candles as you can count) with little interior depth or spiritual experience. But might this focus on interior experience, faith as possession, actually indicate a lack of trust in the quiet work of God through material things? St Porphyrios’ unbelieving baptism offers some hope to those of us for whom devotion and doubt are frequent companions.