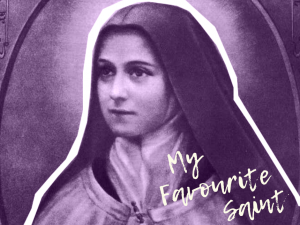 A recent article about my favourite saint, St Thérèse of Lisieux, described her as one of the most dangerous of all saints. Although this is an odd description to give someone so revered within Roman Catholicism, it is quite apt.

Born in northern France in 1873, Thérèse was a sickly and sensitive child, who was prone to tears and tantrums. She lost her mother at a young age and became very attached to her sisters, experiencing profound loss as they entered convents one-by-one. Thérèse longed to join them but was consistently told that she was too young. This did not quell her ambition or determination, though: she petitioned Pope Leo XIII in person to allow her to enter the Roman Catholic Religious Order of the Carmelites, during an audience with him, aged 15. Thérèse was supposed to remain silent during the audience but did not, eventually having to be carried away by the guards. She was permitted to enter Carmel not long after this.

Thérèse’s autobiography, The Story of a Soul, is refreshingly honest in its account of her trials and tribulations in life – particularly once she embarked upon life as a cloistered Carmelite at the convent in Lisieux. She found convent life challenging and was greatly vexed by the smallest things, such as a fellow nun rattling her rosary beads loudly during prayer. Despite her temperament, Thérèse aspired to sainthood; that said, she felt frustrated by the limitations life placed on her, worrying how to fulfil her vocation.

Eventually, Thérèse reconciled that she was not destined to travel the world as a missionary, perform great deeds or acts of penance, or even do things like found a new religious order. Although she longed to do some of these things, she eventually realised that “love includes every vocation, that love is all things, that love is eternal”. She told how, “[b]eside myself with joy, I cried out: ‘Jesus, my love, my vocation is found at last – my vocation is love!’”

What did this mean in practical terms? “Love proves itself by deeds, so how am I to show my love? The only way I can prove my love is by scattering flowers, and these flowers are every little sacrifice, every glance and word, and doing the least of actions for love…” Through this, Thérèse developed her own “little way… the way of spiritual childhood, the way of trust and absolute self-surrender” before dying young, aged 24. Canonised in 1925, she is one of only four female Doctors of the Church.

St Thérèse of Lisieux is a saint of the utmost and striking simplicity, hence her appeal to so many Roman Catholics around the world – myself included. She is proof that anyone can, and should, aspire to sainthood and that great feats are not needed – just a lot of love. This is precisely why the article I read rightly called Thérèse dangerous – she challenges preconceptions about eligibility for canonisation, and our complacency about our ability to become saints ourselves. If Thérèse found a little way, we can too!

Written by Shanika Ranasinghe. Shanika is an SCM Member and a Roman Catholic PhD music student at Royal Holloway, University of London.