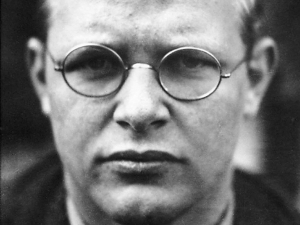 On 1 February 1933, two months into Hitler’s rule over Germany, Pastor Dietrich Bonhoeffer gave a short talk on Berlin Radio. He was only 24, yet already established as one of the most gifted theologians of his day. After 10 minutes the authorities cut him off for daring to criticise aspects of the Nazi regime. 11 years later, on 9th April 1945, he was executed for his support of the July 1944 attempt to assassinate Hitler. In these 11 years he struggled to comprehend how the magisterial Lutheran church had capitulated to fascism. He asked what kind of Christianity would be needed in the post war world and thus created some of the most creative theological thinking of the twentieth century.

First in the Tegel Military prison and later in a Gestapo Prison, (Whilst in prison,) Bonhoeffer had long hours to work on these issues. He wrote letters to his family and his close friend Eberhard Bethge. They were smuggled out of prison by a friendly guard and buried for safekeeping until after the war. He reflects on the decreasing role that ‘religion’ plays in public life and emphasises that incarnational Christianity is not about learning to be ‘religious’ but discovering what it means to be truly human.

‘Being Christian today will be limited to two things: prayer and righteous action before men (sic). All Christian thinking, speaking and organising must be borne anew out of this prayer and action.’ (May 1944; Letters and Papers p105)

The great majority of theology has been written from places of comfort and security, and deals with ultimate things. In his prison cell, Dietrich Bonhoeffer, his faith in those ultimate things unshaken, created waymarks which those who study his ideas have found invaluable in responding to the situations they face.

For further reading, see The SPCK Introduction to Bonhoeffer by Keith Clements  (SPCK 2010) and Letters and Papers from Prison by Dietrich Bonhoeffer (SCM Press 2001).

More in this series:

Part of this series was also published in issue 151 of Movement magazine, the Community issue. Movement magazine is distributed free to SCM members and supporters, and you can request a copy here.

Tags:
Theologian
Theology
< Back to all blogs