The Nationality and Borders Bill: What is a Bill? 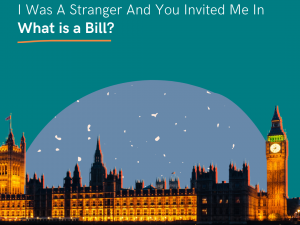 What is a Bill and how is it passed?

A Bill is a proposal to Parliament to create or update an existing law. It must pass several stages before this can happen. For Bills that start in the House of Commons, as the Nationality and Borders Bill did, this includes a first reading in Parliament. This stage is generally a formality and does not include any debate.  Following this, a Bill has its second reading. It is at this stage that MPs have their first opportunity to debate the Bill and outline their support or objections before voting on whether it should progress to the next stage.

Once a Bill has passed its second reading, it moves to the Committee stage in which the Bill is examined, line by line, by the Public Bills Committee. As part of this process, the committee can gather evidence from experts and interest groups from outside Parliament. Informed amendments can, therefore, be suggested and voted on by the Committee. When this stage is completed, the Bill will return to the House of Commons for its report stage, where the amended Bill will be debated and further amendments can be proposed. This will usually be immediately followed by a debate about the Bill's third reading.

When the final version of a Bill is agreed between both Houses, it receives Royal Assent and becomes an Act of Parliament, which means the Bill becomes law. If no agreement is reached between the Commons and the Lords, the Bill will either fail or the Parliament Act can be used to pass the Bill without the consent of the House of Lords.

What stage is the Nationality and Borders Bill currently at?

The Nationality and Borders Bill had its second reading – a two day debate - in the House of Commons on the 19th and 20th July 2021. It passed this stage by 366 votes to 265. It is now at the Committee Stage and had its first sitting on the 21st September. There are a further two sittings tabled for the 19th and 21st October. It is currently estimated that the Bill will be reported to the House of Commons by the 4th November 2021 and the third reading will follow shortly after. If the Bill passes, which looks likely, it is estimated that it will become law in early 2022.

The fast-approaching third reading highlights the urgency of taking action and speaking out against the Nationality and Borders Bill. There is only a limited amount of time to challenge the injustice within the Bill. It is imperative we do all we can to show that we stand with refugees and asylum seekers – regardless of how they came to be in the UK. Please, join us in this new campaign by completing the important calls to action suggested below. They represent small steps in a big journey because how we treat refugees reflects who we are.

Three Calls to Actions you can take before the Bill’s third reading: