No Faith in War: Reflections from the Arms Fair 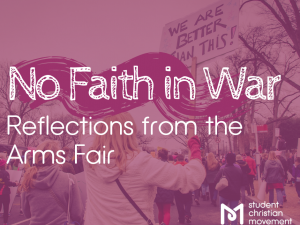 Let me tell you what I know.

You have given me such treasures.

I love you so.

I felt her presence.

Sat in a police station waiting for arrestees to be released – I felt her presence.

The No Faith In War day on the 3rd September was part of a wider protest against the DSEI Arm’s Fair that is held at the ExCEL Centre in London every 2 years. Other groups held their own days of protests – Free Palestine, Campaign for Nuclear Disarmament etc. The aim of the protests was to disrupt the setting up of the Arms fair by blocking the roads leading up to the gates.

Leading up to the No Faith In War day I didn’t really know what to expect. I just knew that I believe in peace and that war is never the answer. But what I didn’t expect was the strong sense of community among strangers. The abundant generosity we all shared. The fact that despite our differences and disagreements, we stood united in our individual desires to see a more peaceful and just world.  We were all united in our belief in peace.

It was hard looking at the ExCEL centre and looking at the weapons that did get in. Physically, those weapons are just pieces of metal. However, they are used to fuel war and conflict that lead to civilian displacement, the emergence of extreme views, and ultimately the death of innocent lives. In the past it has been proven that UK law has been broken at this Arms Fair. Yet the police put so many resources into ensuring that it happens. They were actively enabling an Arms Fair that will lead to the facilitation of oppression which our government claims to be against. As the police began arresting protestors for obstructing the road it felt like they'd got it all the wrong way round. The police who are meant to protect us and uphold UK law were enabling the selling of weapons at a fair that has previously broken UK law.

When the police did move in and begin arresting people they did it whilst a Quaker meeting was taking place in the road. However, instead of fleeing, people stayed - they continued praying and singing. Watching police arresting worshipping protestors whilst singing songs of peace was such a surreal experience that I feel so blessed to have been part of.

In the end the Arms Fair did go ahead, but what matters is that we all stood up for what we believed in. We showed people that not everyone believes war is okay. Blessed are the peacemakers.

Written by SCM member Jack Woodruff. Jack is a maths student at the University of York and secretary of York Christian Focus.

Tags:
Peace
Campaigns
< Back to all blogs