Not Just Ramps and Disabled Toilets: A Movement Towards the Jesus Model of Disability 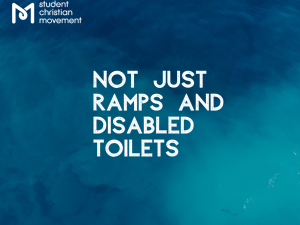 One winter’s evening almost six years ago now I found myself involved in a conversation via Facebook with a bunch of people that I did not know. It began with a thread bemoaning the lack of good Christian literature on the subject of faith and disability. This conversation carried on for several days.

We discussed the lack of quality literature on the subject and that most of what we could find either predated modern thinking and the social model of disability or was highly evangelical in flavour, all too often believing that disability was either the result of sin or rooted in a lack of faith on behalf of the disabled person and that they would be “cured” if only they would believe enough.

Out of this grew the organisation that is now Disability and Jesus.

Our journey has been quite a learning curve. We have discovered that although still somewhat of an underground movement there is currently an emerging movement on the theology of disability - this movement is seeing the emergence of what we like to describe as the third model of disability, a model that we like to think of as “the Jesus model”.

This model takes as it’s starting point the social model but goes further. It goes on to believe that all Christians of all abilities are called to be pilgrims in a spirit of mutuality. This philosophy calls on the church not to create little ghettoes of disability but that people of all abilities journey together holding each other up; there are times when I will need to be carried and then again times I will carry you, none of which matters except for the fact that we are making this journey together.

We have learned that there is so much more to this journey than ramps and disabled toilets. There is need for a fundamental change of attitude. If the church is to become truly inclusive it will require far more than simply improvements in physical access - we need to see a change in culture and a spirit of compromise that says, “I may not be called to a church which suits my style of liturgy, my choice of prayer book and bible translation”, that to be truly inclusive we need liturgies, literature, language and services that can be understood and accessed by as many as possible so that all feel able to belong.

The journey so far has been a huge source of encouragement to us. There are signs of new shoots of this theology appearing if you know where to look.

Last year saw the publication of our book Pilgrims In The Dark, our Twitter community is over 13,500 and we have a simple daily accessible office which is now being said by more than 1,300 people a day. We have grown into a body that the Church of England are beginning to take very seriously, and we are often now called upon to advise in situations.

If you’d told any of us that a simple moan on Facebook could grow into this, we would never have believed it.

Written by Dave Lucas. Dave Lucas is an access auditor and low vision awareness trainer, and founder member of Disability and Jesus. He is the proud owner of now-retired guide dog Jarvis.

Tags:
disability
Activism
< Back to all blogs

Doing Enough? Activism and Protest as a Person of Colour
A Liturgical Perspective on Climate Change
Keep Fighting the Good Fight