One student’s story of faith in Liverpool 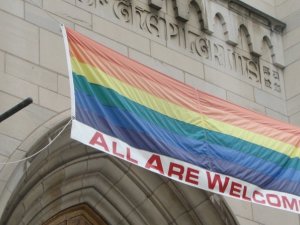 I started the journey to find a church in Liverpool at the very start of my second year. I’d grown up in a Church of England family and had decided to get confirmed at 17, but in my first year I’d never even looked for a church in Liverpool; I hardly remember the thought crossing my mind. It had always felt like there were other more urgent and important things to do, but I was also afraid.

I’d come out as bisexual a year or so before coming to uni and in Liverpool had always been my authentic self, and I had no notion of changing that or going back into the closet for the sake of finding a church. However, I’d never been ‘out’ in a specifically Christian context and couldn’t help but be afraid of what that would mean.

Yet by the end of first year I realised that I was missing God, missing church, just Christmas and Easter when I was at home wasn’t enough. I needed God in my day to day life. I knew that I was loved by God, made this way, and felt no tension between my faith and my sexuality, and I knew that that made me one of the lucky ones. Going back to church for me wasn’t just about going back to church but was also about being called to be a viable queer presence, a voice and solace for those who were afraid and hurting.

So at the start of second year I plucked up the courage to look for a spiritual home. I started, like any self-respecting millennial, on Google and found Open Table, a once a month service that provided a ‘safe, sacred, space’ for LGBT+ Christians and their friends and families. Having no idea what to expect I brought a friend along for moral support and what I found was what I’d been looking for. They gave an unconditional and diverse welcome; a home away from home. For the first time I finally felt that neither my faith nor my sexuality needed justification but that they were joined and connected in one identity: me.

In the two years since then I’ve been to Open Table almost every month and seen it grow from one small congregation to a group that meets twice a month and has sister congregations in ten or so other places around the country. In Open Table as a student I found not only a safe, sacred, space but also connection with older LGBT+ people, something often sorely lacking in young gay culture. I found a place I could step into a leadership role, giving the talk last year for LGBT+ History Month and now actually working for the church.

In doing all this I have been able to offer to others the same welcome that was offered to me, but can also connect with them earlier, and hopefully ease some trepidation and fear. While it is still only a handful of students who have actually been to our Liverpool service, 100’s have seen our posts on social media and know that having faith is not opposed to being LGBT+. I’ve heard from students that they didn’t even know that there were churches that accepted LGBT+ people, I’ve offered a shoulder to cry on for young women having ‘girl troubles’ who have so few other places to go. I’ve served tea and broken bread alongside LGBT+ siblings of every gender and sexuality and learnt so much from them. For me, there has been no greater sense of calling than in sharing in this aspect of God’s welcome; at Open Table I’ve seen what the Kingdom could be.

For more information about Open Table, click here. Open Table Liverpool meets on the first and third Sunday of the month at St Bride's Church. This blog has been kindly cross-posted with the author's permission from Ryan Cook's blog here. Ryan is Anglican Chaplain to the University of Liverpool and Liverpool John Moores University.