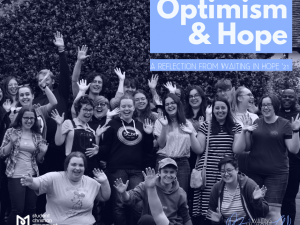 I have to be honest; I was not particularly optimistic about this year’s national gathering going ahead. Despite this I remained quietly hopeful that I might get the chance to top-up my extrovert meter - seamlessly jumping between sharing deep theological reflection and ridiculous quiz rounds with some of my favourite people. Thankfully we were able to meet in person after all, and the weekend was amazing. As we were reflecting on the talks about hoping and being hopeful, we wondered how hope differs from optimism. Is there a difference at all?

Optimism can be defined as ‘the feeling that good things are more likely to happen than bad things.’ For example, I’m optimistic that England women will win the Euros next year. Optimism isn’t necessarily naïve or unfounded (we are hosting the Euros after all…), but it might not reflect the reality of the situations we find ourselves in. Sometimes, there really isn’t much to be optimistic about. When we don’t allow ourselves to think about possible negative outcomes, we might be unprepared for challenging situations. Last year, I was optimistic that the government would respond well to the pandemic, few people would be affected, and we’d all be home for Christmas. The fact that this was far from what happened just led to me getting down.

I’m not suggesting we all become pessimists to avoid disappointment. Instead, I think we should focus on our hope instead. Hope isn’t wishing for the best possible outcomes, it’s our trust that whatever happens, God’s got us. When things aren’t going well, we can still be hopeful because we know that God promises to be with us. I doubt Jesus’s disciples were particularly optimistic when the guy they’d spent the best part of three years following around got killed. The only thing that kept them together, that kept them going when they were huddled in that little room thinking they were next, was their hope in God.

As Naomi shared with us at the national gathering, Isaiah 40:31 (NIV) tells us:

those who hope in the Lord

will renew their strength.

they will run and not grow weary,

they will walk and not be faint.

I don’t think that’s a promise that once we know about God, we’ll be able to run marathons (wouldn’t that be cool though?). It’s a promise to renew our strength, to allow us to be hopeful when there might not be anything to be optimistic about. This kind of hope can be radical – it requires serious strength to be hopeful when others around us can only despair. Sadly, we know that things don’t always turn out well. But even if England don’t win the Euros, it’s still all in God’s hands.

If you would like to catch up with what happened at SCM's National Gathering then please visit our YouTube channel here!