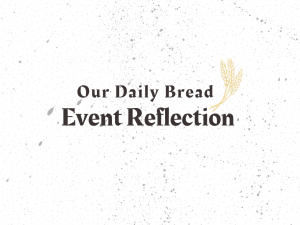 After introducing ourselves (and talking about our favourite types of bread), Revd Heston Groenewald kicked off the event with a Bible study. He was calling in from his church, which runs a pay-as-you-feel cafe, so his reflections were illustrated by various foodstuffs from the shelves of donations. We looked at instances where God had provided for people and filled up those who were empty (Exodus 16:4), and we looked at the unjust society in 1 Kings 5 - this chapter speaks of a society where a few rich people hoarded wealth and resources, and poor people were exploited and commodified. Sound familiar?

We then heard from Niall Cooper from Church Action on Poverty, who spoke about the extent of food poverty in Britain. We watched some videos where three teenage girls explained what dealing with food poverty felt like to them. I thought I was already aware of how big the issue is - foodbank use has increased 3,800% under the Tory government[1], and 30% of children in the UK live below the poverty line[2]. However, there’s something particularly harrowing about hearing it straight from the mouths of teenagers sat in their school uniforms, saying that “teachers just don’t get it”. The videos also highlighted that free school meals were often shrouded in stigma - with children having to go to special tills, eat at different times, or announce that they were on free school meals when asked to pay. In breakout rooms, we discussed our own school experiences, and lamented how many parts of our school lives were based around the assumption of a stable income and parents who had the time and mental capacity to prioritise the education of their children. At my own school, you got detention if you didn’t get your homework planner signed by a parent every week - looking back, this seems horrendously unfair, but at the time I just accepted it as part of school life.

After a quick break, Matt Sowerby led a poetry workshop which allowed us to respond creatively to the issues we had discussed. We had a good discussion about poetry as a tool for political activism and did several exercises to help us write our own poetry. The event then ended with a time of prayer and worship.

Food poverty is an issue at the forefront of a lot of people’s minds at the moment. SCM are encouraging members to listen to people’s experiences, learn as much as you can, and think about how you might fit into the process of creating change. SCM are planning to come together in February as part of SCM online to plan how we can take further action - so watch this space and get involved!