Peace to Contend with War 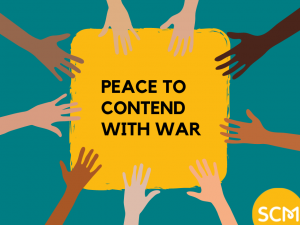 We arrived at the Excel Centre in London after travelling from all across the country to be there. Candles at the ready, the plan was seemingly very simple. We were going to join a silent vigil and protest the DSEI Arms Fair in London, one of the world's largest arms fair where governments and military delegations go to purchase weapons from over 1,600 arms companies. However, when we arrived only a small number of people were allowed through the Excel Centre’s fence to protest. I went up to the guard and asked him why, when it seemed clear we posed no threat. They explained that there were not enough cameras or security to keep an eye on us all. With half the protestors inside the gates and half stuck outside, we had to create a circle together through the metal fence of the centre. This division was a good image of the walls across the world that are put up to divide communities, to keep people apart. Because when communities are together they are stronger, and therefore more powerful. Little did they know that this division that the fences created would only strengthen our message!

The irony of there not being enough security to keep an eye on all of us was blindingly obvious. Inside they were selling weapons, trading tools used to kill others; and yet there we were with a plan to be peaceful, to pray, to share and we were the ones being prohibited from doing this while they were able to continue. Little did they know this was the most dangerous thing that the site would see that day. Leading up to the vigil we took part in craftivism, one of the most peaceful forms of protest. We embroidered words of peace onto the bunting and we tied it to the fence between us. It spoke loudly of love and unity, and contrasted the terror of the business of war going on inside. Because, at the end of the day, that is how those supporting the Arms Fair see war; to them it is a business and its victims are collateral damage for which they have no responsiblity. "Collateral damage"… what a word to dehumanize the victims of this money-making machine.

Quakerism recognizes “that of God in everyone” (George Fox, founder of Quakerism, 1624 – 1691). By partaking in a business which makes money from others’ suffering, those involved in the trade of arms are not simply claiming ‘collateral damage’ but killing the potential for good and love that the people they hurt hold. They sell and trade and discuss how efficiently they can kill the most people, make the most money, and be the most powerful.

Tags:
Arms Trade
Peace
< Back to all blogs

No Faith in War: Reflections from the Arms Fair
Peacemakers: No Military Solutions to Spiritual Problems
Peacemakers: Standing in Silence