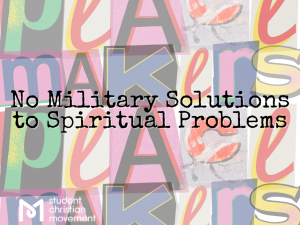 In theory I know a lot about the arms trade and I know a lot about what weapons in the wrong hands can do. I have spent nearly four-years exploring this as part of my PhD, which looks at how and why children have engaged in maritime piracy within Somalia. One of my research participants even described part of the problem as being down to the fact that there are a lot of kids and a lot of guns. Even before this, the arms trade and the awful impact this has on an individual, communal and global level was engrained in me during my MA, which focused on the topics of ethnic conflict, genocide and child soldiers.

Yet, when I attended the DSEi vigil I was reminded that there is a big difference between knowing about something in the academic sense verses what this means on a human level. This event, which was organised by Quaker Peace & Social Witness, Pax Christi and Quaker Roots, was a mainly silent, multifaith candle-lit vigil that took place the night before the DSEi arms fair opened in London. Aside from the silence, time was given to allow the voice of those who have been directly impacted by the UK arms trade to be heard, when organisers read out the personal stories of those living through the war in Yemen. This included the testimony of a women who found out she was pregnant a couple of weeks before the war broke out. Her story detailed her journey from the joys of a first-time expectant mother to the horrors of cowering with her family as bombs fell, during which time she began to question what kind of world she was bringing her child into. This personal first-hand account reminded me that human suffering is intrinsically linked to the UK arms trade. When the silence fell, I reflected on the fact that stats such as how over the last decade the UK has licensed the sale of £17bn worth of arms to human rights abusers are not just abstract facts or figures. Nor do they the support the idea that arms are the solution to issues that are so often the result of human insecurity. Rather, they are the cause of profound human suffering and injustice that the UK Government and UK industry is complicit in supporting. Furthermore, while there are numerous treaties in place, weapons still make it into the hands of those who should never handle them – such as children.

There are no easy answers to solving the problems of war. Weapons won’t be turned into ploughshares in the near future, but as one of the speaker’s so adequately summarised ‘there are no military solutions to spiritual problems’. Rather, I believe the solution will come from events like the DSEi vigil, as standing there in prayer and reflection with 300 people it felt as though the silence was deafening. Knowing that I stood there with hundreds of other people who recognised the human suffering of the arms trade was profoundly moving, energising and restorative. You can find out more about the DSEi arms fair and the campaign against it by visiting Stop the Arms Fair.