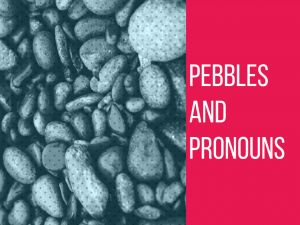 I recently led a workshop about the complexity of language, about how we ‘Name’ one another and what political implications this might have.

As an icebreaker, I asked each participant to choose an object from a box. This box was full of random objects; sticks, stones, pieces of pot and a few old pieces of metal. Each person was given a minute to ask questions to another person about the object they had chosen. The catch was that they couldn’t use the name of the object – or the word ‘object’ – to refer to it. Instead the participants had to think about other, perhaps unusual, ways to refer to these pieces of the forest.

It was an exercise in discomfort, to expose the limits of our ‘ordinary’ language, to see what we do when those ‘ordinary’ words for things are removed. The words that people used to refer to the pieces of the forest were interesting; splitting into two categories. The first set of words were ordinary words which could fit – somewhat awkwardly - into the questions; words like ‘this’, ‘item’ and ‘thing’. Other words were more creative, drawing on how we might relate to these pieces of nature; things like ‘nostalgic relic’, ‘galaxy’ and ‘spikey tree fruit’. This activity was liberating for many, but it was etched in trepidation. As if we were doing something wrong by going against the ordinary ‘rules’ of naming these objects, with the more creative alternatives being seen as strange and whimsical.

Our own names are similarly paradoxical; they encapsulate us in ways that are difficult to understand.  When we are named we are constructed in some way, our identities are forged and boxed in within certain ways of being. At the same time our names can express us. They allow us to be recognised and included. Often these names have a kind of legacy, perhaps linked with a family member, place, or characteristic. But they are also linked with gender. Our names and pronouns are often heavily gendered along binary lines, with some names feeling heavily masculine or heavily feminine or remaining ambiguous. Pronouns follow similar rules, with ‘he’ often referring to men, and ‘she’ often referring to women; with ‘they’ operating only to refer to groups or singular forgetful people (“they have left their umbrella”).

Trans people – fabulously – disrupt these traditional social rules around naming. Typically, trans people have a disjointed relationship with their names, with their birth names often constructing a person whom they do not wholly identity with. As a result, many trans people change their name to better fit their gender identity. This is an important step for many, primarily because names are essentially performative; they do stuff to us. In changing one’s name there is a sense of agency, of power, exercised by the trans person over the language that is used by others for them. For many it is an act of survival, enabling them to navigate the world more comfortably.

Re-naming, thus, is a euphoric act, enabling a more appropriate social location; to be more authentic in the world. But it is also massively dangerous, with mistakes being catastrophic to a person’s wellbeing. As a result, it is important that all of us – however we identity – are conscious of the potentially wounding properties of our language. There is nothing worse then being misgendered or misnamed. It is almost as if people are only able to see you – to engage with you – if you pretend to be someone else. This is not a kind position to put someone in.

As the nature naming activity at the beginning highlights, it can be uncomfortable to alter the way we think about naming, to deconstruct the ‘ordinary’ language we use. However, being conscious of the limits of our language in its current form can be liberating. It can help us to let go of our default names for stuff and to get creative, to dare to see the world differently, and to let it change us.

When we think about the inclusion of trans people, this deconstructing task is given a new urgency. Re-engaging with the natural world can offer us priceless tools to being creative in our approach to naming. In exposing the politics surrounding the naming of nature, we are able to see more clearly the politics of naming in everyday life, and perhaps learn to be more inclusive when we encounter our trans siblings, incorporating their prophetic insights into our language and worldview.

Written by Kenneth Wilkinson-Roberts, an SCM Member studying in Lancaster.