The Politics of the Cross: Part Five 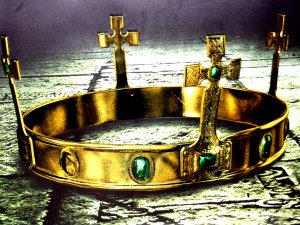 John: A Kingdom Not of This World

John’s passion story is dominated by the excitement engendered by Lazarus’ coming back to life. All Jerusalem was agog, though it made the authorities jittery (12.9-11). Indeed they thought of getting rid of both Lazarus and Jesus. But the crowd, when they heard he was on his way, rushed out of the city to meet him and to welcome the King to his capital. Yet there is a strangeness about this king, for he exercises his rule by washing his disciples’ feet and calling them friends (13.1-20). John emphasises the close union between Christ and his disciples (14-17): they are to be the continuation of his work, his presence in the world. The glory that Christ exhibits in the world is paradoxical. It is found at the very point of weakness on the cross. The cross is the royal throne (12.27-36).

The King comes to his city and ascends the throne, in his own time and his own way. In John, Jesus is depicted not as the victim of events but as the controller of his destiny (cf. 18.11;36). This gives the clue to John’s portrait of Jesus: his detachment from the constricting ties of this world because of his single-minded attachment to the will of the Father. Nothing else has power over him. It is this detachment that illuminates the question as to why Jesus remained peaceful in the face of the violence being done to him. Jesus answers Pilate: ‘My kingship is not of this world; if my kingship were of this world, my servants would fight that I be not handed over to the Jews’ (18.36). To have fought back would have been to play the world’s game and would have been the betrayal of all that he had lived and stood for, abandoning his trust in God and relying on other tools.

This detachment is the secret of Christian freedom. The politics of the cross is not primarily a series of ethical decisions, but a commitment to be a disciple of Christ. Like Jesus, we have to discern the will of God in the complexities of reality. We are each placed where we must exercise our judgements within the limits of our circumstances. These are our God-given responsibilities. Here we exercise prudence and serpent cunning (Matt.10.16), but this must not be allowed to obscure our first allegiance. Like Paul, none of us can claim to have begun to reach the fringes of perfection (Phil.3.12). The question is whether we are pressing towards the mark, the goal of the high calling in Christ. What is certain is that we cannot avoid having to exercise this discipleship in the daily world of social, economic and political decision.

Part One: The Politics of the Cross - Introduction

Tags:
Theology
Jesus
< Back to all blogs