The Politics of the Cross: Part Three 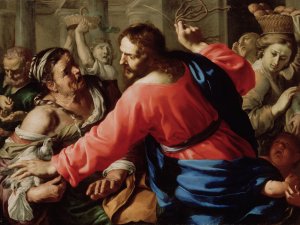 Matthew, on the other hand, though dependent on Mark in many ways, gives a very different picture. Jesus comes to a strange and hostile city. ‘Who is this?’ the citizens ask (21.11). The crowd who have travelled up with Jesus form the triumphal procession. The royal progress is emphasised by quoting Zechariah: ‘Your king is coming to you’ (21.5).

Jesus then proceeds to occupy the Temple. The act of cleansing is followed by an influx of cripples, who would not normally be allowed in because they were unclean. Matthew quotes from Isaiah to emphasise the Temple as a place of prayer where the outcast and the needy can call upon God (21.13). There were children, too, crowding in, singing Davidic songs. These, too, should have been excluded, with the women, to an outer court. It is this that incurs the wrath of the priests and rabbis. Jesus outsmarts them by demonstrating the legitimacy of these radical happenings. ‘Have you never read: Out of the mouths of babes and sucklings thou hast brought perfect praise?’ (21.16; Is. 8.2) This is the first of a series of attacks on the religious leaders, unmitigated by any real expectation of change. Indeed Jerusalem seems beyond hope (21.28-23.36). She is left forsaken and desolate until the day of judgement (23.37-9).

Here, then, the conflict is open and absolute. Jesus’ prophetic act is one of final judgement against a city that has already closed itself against him. The cross is the inexorable result of this encounter, for they are not ready to receive their Lord (Wise and foolish virgins, 25.1-13); nor keep faith with their responsibilities (the Talents, 25.13-30); nor care for the oppressed, the poor, the outcast, or the least of Christ’s family (Sheep and Goats, 25-31-46).

Every so often, the politics of the cross has to be expressed in terms of absolute confrontation. Martin Niemoeller could not go on obeying Nazi edicts that meant denying the gospel. Archbishop Camara challenged the Brazilian authorities on human rights and the suppression of the poor. To resist and refuse to take the road downhill is hard, but it is seldom done alone. The consequences of discipleship have to be accepted, for the authority of the Messiah is exercised, not by calling up legions of angels (26.53) but by wearing a crown of thorns.

Part One: The Politics of the Cross - Introduction

Part Five: John - A Kingdom not of this World

Tags:
Theology
Politics
Jesus
< Back to all blogs