The Poppy Question: An Anabaptist Response 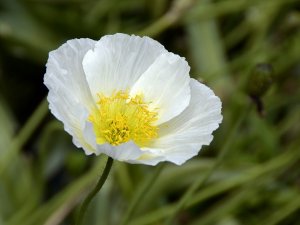 Which poppy would you wear as part of the Gospel’s Peace Witness?

It appears that white poppies are quite liked by Anabaptists both here and in Canada, even though occasionally British ones decide to wear none at all, and some Canadians wear both (as Quakers often do in the UK). For Michael and Cheryl the issue boils down to the shift in meaning that the red poppy has seen: “In a way, when they start glorifying the sacrifice and not mourning the loss, it becomes a statement about how the war granted a form of salvation to the people who remained. It becomes an aspect of having saviours for the civic religion of nationalism”, on the other hand a white poppy “comes from the perspective that one needs to work for peace and remember that peace is what makes us free”.

Should the Royal British Legion be supported?

Michael and Cheryl recognised the positive role the RBL has in helping veterans, but also believed two problems exist: “they are not holding the government accountable for what a few feel is their moral failing. The government asks people to risk their lives, or at least life changing injury for the government’s causes and then leaves the soldiers’ families and soldiers themselves to make their own way after they return and the war or military action is over. […] The second issue comes with the Royal Legion’s ties to arms companies. Why would an organisation, who works so hard to help people who have been harmed by war, want to have ties to one of the major groups that helps to harm those same people? It does help to make sure that they have a continued purpose. That is a bit cynical. I think that it really stems from the fact that the narrative has shifted from one of repairing peoples’ lives to one of glorifying soldiers and war.”

How can we help veterans, then?

I was not surprised to hear that the main Anabaptist focus would be reconciliation and forgiveness: “one of the areas that would be a great deal of help, is for Anabaptists to look for ways of helping with issues of moral injury. [...] Helping people to navigate through the issues of acting out those things that they know to be immoral, can be a great service. It can help prevent some of the homelessness or even suicide. Helping people to recognise that they can be forgiven for what they’ve done can have a huge impact on their lives”, as well as advocacy for peace with groups such as Veterans for Peace and finding “ways of bringing the kind of damage, both direct and indirect, to forefront of peoples’ thinking. Trying to help people recognise the kind of life changing activities that soldiers participate in”.

Should Remembrance Day be observed or replaced by Peace Sunday as advocated by Canadian Mennonites?

“Remembrance Day is a mixed day for many Mennonites. Often, Peace Sunday is celebrated with World Peace Sunday in September and Remembrance Day is done a little differently. Part of the approach is to respect peoples’ connection to their neighbours, who believe differently about war. It is a time to be sensitive to the losses that wars have brought, without glorifying war. [...] It is also a time to recognise that Mennonites/Anabaptists hold to a different understanding about what is right and about the need for pacifism as an opposition to war and the military. Remembrance Day, often becomes another Peace Sunday for many Anabaptists. But, I think many make a greater effort to remember what the destruction of war leaves, not just in loss of life, but in quality of life.”

My talk with Cheryl and Michael proved to be surprising – I found that the conclusions that I had reached for myself in terms of where I stand with poppies as someone who was has never set foot in a Mennonite church matched incredibly well with those of seasoned Anabaptists. I am now even more convinced that the Gospel of Peace calls us to be peacemakers even during these first two weeks of November, to steadfastly proclaim that war is not a necessity of life, that – as Mennonites say -- “to remember is to work for peace”, and that the Christian gospel is about “surrender and the practice of peace […] a peace that leaves no need for violence” (Michael Hardin).