Prayers Are Not Enough 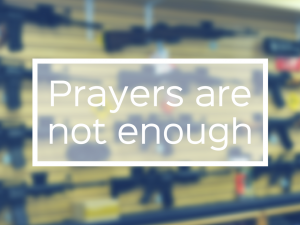 I suppose we all have some feelings about the recent mass shooting in Florida, from anger and sadness to frustration and disbelief.  There has been much discussion about the incident on social media, and what I have found so interesting is how people in places of power have responded. Donald Trump's tweet after the shooting in Parkland, Florida read as follows:

"My prayers and condolences to the families of the victims of the terrible Florida shooting. No child, teacher or anyone else should ever feel unsafe in an American school."

My main response was something like "Your thoughts and prayers don't mean anything! Do something!", which is the censored version. After reflection I don't agree with the first part - I can’t pass comment on Mr Trump's prayer life - but I certainly do agree with the second part.

I want to quickly explore James 2:14-26. I'm sure your familiar with it, the biblical translators have helpfully added the section title 'Faith without works is dead'. Basic summary; if your faith doesn't have action, then that faith doesn't bear fruit. Strong wording, bit scary. But there is truth here. What is the point of faith if it does not fundamentally change us to become people that stand up against injustice and (excuse the christianese) stand up against darkness. I don't believe that God created me to just feel good about myself and be part of big social club.

Whatever we might say about conservative Americans and Trump, I'm sure some of their prayers are earnest prayers. But it can look like a massive shift of the blame when the people who can make a difference in their country are tweeting things like Trump did. It puts the responsibility on God to sort out all the issues; 'God will do the counselling and recovery of the people affected, we shall carry on as we were'. It skirts over the cause of the problem which is not God. Now, I am not saying that God can't heal and bring hope to those affected, but people need to be part of the solution too. Pope Francis said, “You pray for the hungry. Then you feed them. That’s how prayer works". If we pray against evil or gun violence, then we must do more to stop evil and gun violence. To be advocates of peace and the sanctity of life.

The fact of the matter is that guns with bullets are designed with the purpose to kill and injure people. Jesus never stood for that (see Jesus and Guns blog). So definitely pray for the families affected, for America, and for Trump, as much as it might pain you to do, because prayer is powerful. But also fight for what you believe in, even when it feels tricky and you don't know what else to do, as so often is the case when it comes to tricky times. It hard for us here in the UK observing from across the pond to do much about it, but what we can do is support those who are the voices calling for change.

Tags:
Faith in Action
Prayer
< Back to all blogs

Exile As Opportunity: The Fringes and Hidden Corners of the Church
Black Grief
Zooming Off and Unexpected Fruits