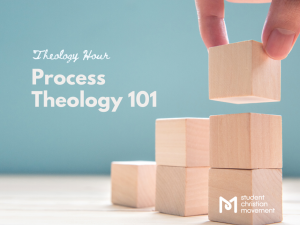 In the 1920s, Alfred North Whitehead developed a new metaphysical system of thought called process philosophy. Across a series of lectures, which have since been published under the single title Process and Reality, Whitehead described a reality where everything is made up of occasions – metaphysical ‘particles’ which have their own desires and experiences.

Whitehead’s student, Charles Hartshorne, took Whitehead’s metaphysics – which, while peppered liberally with explicit references to God, was by no means a work of confessional Christianity – and developed it further using the tools of more specifically Christian philosophy. Hartshorne did not turn Whitehead’s philosophy into a Christian theology himself but laid the groundwork for many thinkers who came after to do so – these thinkers are now known as process theologians.

This view of God has not gone without criticism. A common criticism of the process God is that it, being dipolar, is inherently not Trinitarian and thus undoes much of the work of early Christian theologians who worked hard to retain a Trinitarian theology. Process theologians have attempted to rebut this criticism, most notably in the book Trinity in Process: A Relational Theology of God, edited by Joseph Bracken and Marjorie Suchocki.

Much debate has been and continued to be had about whether process theologians have been successful in identifying their process God as the Christian God, or whether the process God is nothing more than a philosophical thought experiment which has no place in true Christian theology. As it stands, this remains to be seen.

Tags:
Theology
< Back to all blogs

The Theology of Trauma
A Church's Place is in the Kitchen