Protests for Peace and Campaigns for the Climate: Faith in Action Update 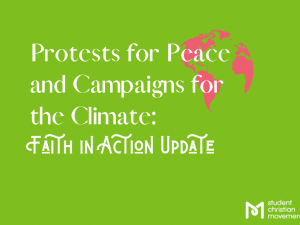 On the 3rd of September SCM members joined me at the DSEI Arms Fair to protest the sale of weapons to known human rights abusers. This event, sponsored by the British government, brings together some of the biggest dealers of weapons and security equipment from around the world to trade with countries where oppressive regimes rule and innocent civilians are hurt and killed by those very weapons displayed for purchase right here in the UK.

Faith groups including Jewish, Muslim, Buddhist and other faith traditions joined during the week before the fair to block the entrances and disrupt the preparations for the fair. Lorries carrying resources for the fair were diverted and delayed as we stood in the road refusing to move, leading to almost 50 arrests on the day we were there.

Despite the deeply troubling reason for our being there, the protests were filled with hope and a sense of solidarity, both with each other and with those around the world who we prayed for, knowing they would suffer at the hands of those purchasing the weapons on sale. We joined in peaceful Quaker worship, Muslim prayers, and Christian liturgy led by Anglican and URC priests, singing Taizé songs and praying together for peace. We were well looked after, with food from the Hare Krishna community, and stewards milling around ensuring everyone knew what was going on, checking we had enough water, and offering legal support to those who chose to be arrested. I came away from the day feeling hopeful and uplifted by the incredible faith community response to this evil event, and optimistic that there were so many people of faith willing to act directly and peacefully for justice.

With that in mind…

Campaign for the Climate: September Strikes and October Rebellion

The climate needs you! I’m sure you’re aware by now that the situation we face with the rising temperatures and CO2 production will lead to ecological breakdown and dire consequences for the future of the human race. We’re called as Christians to do all we can to protect our planet, and to ensure a future for our generation and generations to come.

So, join the resistance! First, on the 20th of September the adults are joining the school strikes and declaring a Global Climate Strike – taking a day out of work or study to gather locally around the world and demand an end to the fossil fuel economy. Why not take your SCM group? Let us know if you go!

Then, from the 7th of October, we’re joining Christian Climate Action, Extinction Rebellion, and others in another International Rebellion. We’ll be taking part in the Faith Bridge for a week of prayer and worship while we peacefully disrupt business as usual around Westminster. SCM can offer travel bursaries and we’ll be gathering as a movement during the week, so get involved and put your faith into action! Contact Emma on emma@movement.org.uk for more information.