Proud to Be... A Fighter 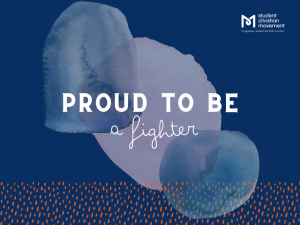 Pride is something I have a strange relationship with. I definitely relate to the ‘seven deadly sins’ type of pride: the pride that comes before a fall. Yet feeling proud of myself for something that I’ve done is something that comes less naturally. Perhaps it’s the legacy of being in an overachieving family.

One thing I do take great pride in is my fortuitously chosen name. My first name, ‘Shanika’, translates from Sinhalese (one of the languages of Sri Lanka) into English as ‘Peaceful Lady’ – which is true of my general nature and demeanour. My last name, meanwhile, translates as ‘War Lion’. This is just as equally true of me: I may look cute and smiley, but I am not to be messed with. I am a fighter.

What does ‘fighter’ mean in this context? I am fortunate in that – despite being a BIPOC and disabled woman – I have not had to fight as hard as many of my peers for equitable treatment and justice. For example, I have had very few instances of racism that weren’t behind my back, but to my face instead. Racism of all forms is deplorable, of course – but being confronted with it direct, in my experience at least, feels more galling and harder to comprehend and deal with.

So many marginalised people have it so much harder than I have. I count my blessings and thank God that I live in a multicultural city where diversity is accepted - even welcomed (or at the very least, is grudgingly tolerated by the minority of haters). Yet that is not to say that I have never experienced prejudice. Since developing psychosis in 2010, I have dealt with the stigma, mishandling and misconceptions that come with such a diagnosis. I have had to fight for my right to be recognised as a disabled person (in accordance with the Equality Act 2010) and to be treated accordingly. Equally though, I have also had to fight to be taken seriously: to not have my opinions dismissed due to my having a psychosis diagnosis. I have also had to fight against inaccurate stereotypes of all people with psychosis being a danger to others. The amount of misinformation and misunderstanding still out there regarding severe mental health diagnoses is frustrating.

Even before I was diagnosed with psychosis, I was fighting against misogynistic bullying at my undergraduate university. Although I initially felt helpless and disempowered, my Roman Catholic faith gave me courage. Learning to see myself how God sees me, has been a crucial part of my journey. Having strong female role models - such as my secondary school headmistress Sr Brenda, and my PhD supervisors Anna and Shzr Ee - has been instrumental too.

It’s not always easy being a fighter and it does feel tiring, having to fight in the first place. What keeps me going is my God-given conviction that, as a beloved child of God, I deserve to be treated right. Learning to fight has helped me become the strong woman I am today. So, even though I’d rather not have to fight at all, I realise that – to quote Christina Aguilera momentarily - it “makes me that much wiser/so thanks [God] for making me a fighter”.

Written by Shanika Ranasinghe. Shanika is an SCM member, a Roman Catholic, and a music PhD student at Royal Holloway, University of London.

Tags:
Black History Month
BLM
< Back to all blogs