Putting Doubt into Faith: An Introduction to Christian Existentialism 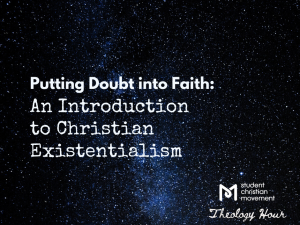 Most people know existentialism as a philosophy which focuses on the notion of being and views the world through an explicitly subjective lens. It is also a notoriously angsty way of thinking, whose proponents have spent an awful lot of time writing and arguing about fun things like anxiety and absurdity. Knowing all of this, it is probably evident that existentialism is not exactly the easiest philosophy to incorporate into Christian theology. There are obvious clashes between an all-powerful and all-knowing God and the presence of anxiety and absurdity in our lives. In fact, many existentialist philosophers actively rebelled and fought against the idea of God. Sartre’s maxim that “man is nothing else but what he makes of himself”, what he described as the first principle of existentialism, flies in the face of a belief in a God greater than all of us. Yet, Christian existentialism has a long history, with some scholars tracing this school of thought all the way back to St Augustine. This introduction takes a look at the contributions of Kierkegaard and Tillich to theology, as these two thinkers are perhaps the two most powerful proponents of Christian existentialism.

Søren Kierkegaard is generally viewed as the father of existentialism, and the first person to explicitly outline a form of Christian existentialism. Although earlier thinkers like Augustine are relevant to existentialist theology, Kierkegaard’s works are the foundations of the school of thought we know as Christian existentialism. And it is no surprise, as Søren was an incredibly angsty person (and he was the first person to use Angst as a concept in his writing). Kierkegaard lived an unhappy life, and this is reflected in his writing: Fear and Trembling and The Concept of Anxiety are not exactly book titles written by a contented man. In these works, Kierkegaard presents an unhappy world riddled by anxiety and fear. Yet, he also shows us a God who embodies Love, and urges a return to the values of the New Testament: grace, humility and love. Perhaps most importantly, Kierkegaard places doubt at the centre of Christian faith. He argues that Christianity is not based on objective certainty but subjective relationships with God. These subjective relationships depend on making a “leap of faith”, believing wholeheartedly in God regardless of any evidence to the contrary. By placing doubt as a first, crucial step towards faith, Kierkegaard speaks to all of us who feel anxious or sceptical. Kierkegaard also helpfully provides examples of people who have taken that leap of faith and have thus become “knights of faith”. These knights of faith continue to believe no matter what, whilst recognising how absurd their belief is. Kierkegaard suggests that only Abraham and Mary are true knights of faith, but that we should nonetheless aspire to be like them. Personally, I like to think of all those listed in Hebrews 11 as knights of faith. Yet, the point of Kierkegaard’s writing is not that we all need to be perfect but that we should all have faith, whilst still recognising the doubts we have about God and about the purpose of our lives.

This leads us to Paul Tillich. One of my favourite Tillich quotes is “doubt is not the opposite of faith; it is one element of faith”, which somewhat sums up the role of doubt in Tillich’s existentialism. I have written about Tillich for SCM at length before, yet I always come back to his work. Tillich’s book, The Courage to Be, is perhaps the theology book that has had the most impact on my life so far. In the book, Tillich discusses “absolute faith” – the idea of a faith that has been ravaged by doubt yet still believes. And just as Tillich urges us to have absolute faith, he tells us of “the God above God” or alternatively, “the God who appears when God has disappeared”. What Tillich is talking about is a God that is so unconditional they continue to love us despite however little we might believe and how disparaging we might be of them – he emphasises this unconditionality by referring to God as The Unconditional. By having absolute faith in the God above God, we can then have the courage to overcome guilt, meaninglessness and even death. Despite the many trials and tribulations inherent to the human condition, God remains. Despite what we continue to do to the planet and to each other, God remains. This does not mean that we will stop having doubts, fears or anxieties. Rather, we are able to continue to have such concerns and still know that God is with us and that God loves us.

Fundamentally, both Kierkegaard and Tillich describe to us a faith defined by doubt. They write that doubt is essential to faith, and that doubt is not a barrier to but an enabler of faith. If like me, you experience doubts and anxieties a lot of the time, I suggest you try and read some Kierkegaard or Tillich. I hope that they will prove to be sources of comfort and courage which enable you to live out your faith in our strange and broken world.

Written by Nathan Olsen. Nathan is the current Editor of Movement magazine, having previously been a member of SCM Leeds. He is also studying for a Masters degree in Sheffield, writing a dissertation on the Jubilee 2000 campaign. And he’s a bit obsessed with existential theology, if you hadn’t noticed!