Queerly Beloved: Encountering God in the Every Day 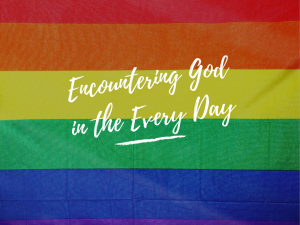 It feels somewhat strange to be writing a blog post on being an LGBTQ+ person of faith during a period of increased dissonance, upset and anger within the Church of England. In a lot of ways I’m lost as to what to say, sad at the system, and confused as to what my role is in all of it. I’ve been left with a feeling of collusion, that I am not doing enough, but also of profound exhaustion. Nowhere else do I consistently have to justify my love, and desire to be loved authentically, honestly, proudly. Nowhere else is my sexuality and gender identity up for debate.

On the 22nd of January, the Church of England released a ‘pastoral document’ that reasserted its official theological and doctrinal position on sex, marriage, and relationships. The legalities of the document are nothing new, but when you wrap legal terms up in ecclesiology, theological reflection, human experiences, and sexual ethics, it doesn’t take much for it to all go wrong, and for the most marginalised (in this case LGBTQ+ clergy and lay folk) to be further targets of discrimination, isolation and abuse. This blog post is not about that pastoral document, because in a sense, I don’t want to give it anymore traction. It is not written by LGBTQ+ folk, it declares a heteronormative sexist, misogynistic and homophobic position and to elevate its voice only undermines the voices of queer people in the church. For people like me, in the position I am in, I do have to listen to that document whilst safely navigating my way through its context and position. I have to act with grace where frankly I don’t always feel there is any. I have to be angry in the right ways and not lash out at those who are trying to mediate the wrong. I have to pray that truth, love, and justice will prevail and that transformation will occur.

I have recently come under criticism for not being active enough. As a queer person I don’t necessarily know what that means because my very existence and identity is counter-cultural and active. I am non-binary ,and I am in a relationship with a woman of colour. How we live our lives as Christians has come under scrutiny in ways that I cannot always fathom or understand. I think the criticism has come from a place of wanting us to be more outspoken, to turn over the tables, to be on the front line of a protest, to always be ‘on call’; ready to fight the system another day. However, my activism, my queer Christian voice, is not just that. It’s prayerful, it’s mundane. In the everydayness of peeling potatoes and putting the washing away, God can be found. It’s going home at the end of a busy day at church and cuddling up with my partner on the sofa. It’s being the server on a Sunday morning. It’s doing the kids work and being a role model to the children that I am beyond gender but still just a normal grown up too. It’s sitting on Deanery and Diocesan synods and encountering the stares and the dead-naming and the misgendering and trying to help people understand. It is embodying what I believe in, what I feel inside, what God is calling me to do, from the very moment I wake up, to when I flop into bed, kiss my partner goodnight, and thank God that I have gotten through another day.

This is what the pastoral document doesn’t seem to grasp, because it tries to undermine my experience as purely a focus on sex, or a sexual act. By carrying on with the everyday, I am resisting what the homophobic conservatives would like to say about me. In my early twenties I thought that being a queer activist meant always shouting, always blocking the way, always pushing forward. However, I have learnt to listen, to breathe, to meditate, to never collude but also not to walk away. I have learnt that being queer means living in the mess of it all, always having hope we can start afresh, again, again, and again.

Sometimes I feel like the most threatening thing is to ask whether someone who hates you would like to have a cup of tea. As you boil that kettle, squeeze that teabag and stir in the milk, the most mundane act in the world can become the most powerful. It is where the Kingdom of God can be found, and encountered.

Written by Lu Skerratt. Lu is a PhD student living in Sheffield. They volunteer at St. Mark's Church, and they're a trustee of One Body One Faith.