Race, Equality and Universities: What’s our responsibility? An Invitation to Respond to the Race Equality Charter 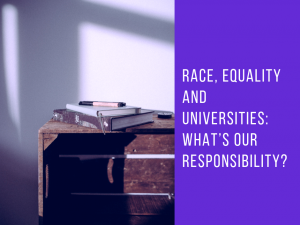 The University and College Union (UCU) recently released a report written by Professor Kalwant Bhopal and Clare Pitkin from the University of Birmingham examining the attempts of higher education institutions to engage with the Race Equality Charter (REC). Through the work of the Equality Challenge Unit (now “Advance HE”), the Race Equality Charter was designed to help higher education institutions self-identify their progress in addressing racial inequalities for students and staff. Institutions can apply for a three tier award—gold, silver, or bronze—according to their level of success in improving racial disparities in student progression and attainment, diversity of curriculum, and staff recruitment and retainment. Overall, Bhopal and Pitkin’s report found that while the Race Equality Charter has encouraged institutions to initiate conversations on how to best challenge long-standing institutional culture on race, it has done little to foster real, observable change as of yet. Their report affirms the Race Equality Charter as a positive step in the right direction and one that is certainly over-due, however, it highlights continuing disparities such as the number of black* professors in the UK (only 70 compared to over 13,000 white professors), and the significantly higher drop-out rates of black students compared to white students (one and half times more likely).

In light of the stark inequalities facing Black and Minority Ethnic (BAME) students and staff, I welcome the challenge presented by Bhopal and Pitkin: in sum, higher education institutions have made promising strides, but more must be done. How can we respond to this? I suggest that there is a three-way approach forward: How can we as students respond? How can Christians respond? And how can the wider society respond?

All of us have a part to play, and furthermore responsibility, in taking concrete anti-racist actions. One of the interviewees in the report mentioned that she was troubled that BAME staff always seemed to possess the burden of discussing racism and inequality within the institution and “taking up the charge” to address how to facilitate systemic change, whilst white staff and students were allowed to maintain a passive role in anti-racism work. Such a positioning by white staff and students neglects to remember that we are all racialized, and we all live in a racialized society. I assert that white students and staff, white Christians, and white members of society have a duty to engage in this work. For students and staff in higher education institutions, engagement can involve championing the de-colonization of assigned text and literature within a course. Other actions include setting the work of the Race Equality Charter higher on the agenda in the university, particularly with senior management, as the report found that work on the Race Equality Charter was often de-prioritized for other initiatives. In the practice of Christianity, the experiences and perspectives of Black and Minority Ethnic individuals in faith-based spaces can be further centered. For those in the wider society, it is the recognition that inequality and bias do not start at the university-setting, but rather have been ongoing and perpetuated within systems and structures throughout society, and on an individual-level, the experience of inequality begins at birth.

How can we direct our prayers?