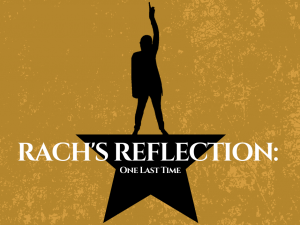 Back in July, two significant things happened as the SCM staff team returned from Furlough: I received an Alice Fraser necklace in the post, and Disney Plus released Hamilton. Sometimes musicals become a part of you; you find lyrics speak to what’s going on in your life. After watching Hamilton, lines like “that I wrote” and “I’m the president” became part of my everyday language, especially when life is “non-stop”.

In my sorting through of the last four years as I prepare to hand things over, I found my Belbin Self-Perception Inventory (a behaviour-based questionnaire) and was reminded that I am 100% not a ‘Completer Finisher’. This time of ending things is not in my natural skillset. When we returned from furlough I knew that I was only going back in order to prepare to leave, and on that first day the Alice Fraser necklace I’d ordered weeks before arrived from Australia. It was perfect timing, and I started this time of ending wearing the words “Only the unfinished can contain the infinite.” My life has been sitting in this paradox for these final weeks. Things are finishing, so that other things can start. But also, things go on in our absence, and I am very much learning to let go. The one thing I’ve learnt in the discernment process for ordained ministry is to live in the moment, in the ‘if’. I once described it as “the unspoken yet always there ‘if’”. There is still much to learn for me as a forward planner in letting God lead as I hold on to the moment I’m in.

I’m not the first ever regional worker at SCM; over the decades SCM has had Travelling Secretaries who got to travel first class so that they could keep up with their reading! I was, however, the first Regional Development Worker in this new style, of this generation, and it’s a sad moment to leave the rest of the team. I’ve loved working alongside and nurturing the others with “what I have learned, the hard-won wisdom I have earned.” I “could continue to serve” – but it would not be right. I am “stepping down” from SCM and leaving my fabulous colleagues, students and links, and a job I’ve loved which has been a really good fit, to go on to something else which feels like it’s even more who I am meant to be. These four years have been a pleasure and a privilege, and I wouldn’t have missed them for the world. And if it wasn’t that God was calling me onwards, I would not be finishing my time here, ‘cause there is infinitely more that could be done.

I’m not leaving SCM forever. That is not how SCM does community! I’ll become a member as a student, and a Friend when I’m earning again. But learning how to “say goodbye” is significant. I’m so glad that the regional team “outlives me when I’m gone”, and that I have done my part for the history of SCM. But now it is time to finish, to “move on.” SCM, just like the students within it, are always moving; it's in the name. I’m excited to see what happens next, and my prayers are with all of you as we step into the new year and find out what God has in store.

Rach Collins was the Regional Development Worker for the North West and Events Lead. In her time at SCM she caught 2305 trains and leaves the staff team to become an SCM Member while training for the Methodist Ministry.