Rach’s Reflections: Whatever the Future May Be 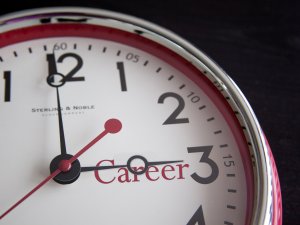 I ended up on the Telegraph website the other day, (not on purpose, you know what happens when you click on one article from Facebook), after pondering what to blog about this week. I came across two articles that confirmed my theme of vocation, discernment and life choices.

The first article was a brief report into a recent survey about young adults’ view of maturity – with around half saying they only felt like a mature adult after reaching particular milestones. According to the article, most millennials do not consider themselves ‘grown up’ until the age of 27. This does make sense. We often think we'll be a grown up when we've done this, achieved that or reached a certain milestone, such as owning a car, getting a mortgage, or getting married. Of course, there’s no guarantee that being a grown up means you know exactly what you’re doing.

This is the time of year I always think about my first ‘grown up job’ as a Youth Ministry Coordinator for Discipleship (I've always been a fan of snazzy titles). My first day nerves appeared on my Timehop app recently, which is an online time capsule of past moments. I was lucky, I studied something that was clearly linked into a career, and a "vocational" one at that: I went into Church Youth Work after studying Youth and Community Development Work, although many of my coursemates didn't end up in youth work at all. Similarly, I have friends who studied more traditional academic subjects and, years later, are still working out what they want to do after flitting from temporary jobs and internships. These are the people we often label the under-employed.

The second article (and the one that started my time on the Telegraph website) was an interview with the outgoing head of UCAS, who said students should not need to worry about their careers until at least six months after graduating. But the reality is that they do – the future is something that stresses all of us out. Whether you are a planner or someone who just tries to cope with whatever is thrown at you, the future is a scary prospect. If you've worked out your career six months after graduating, you are doing really well.

At the SCM event ‘Called to be…’, we explored vocation and talked about how we don't just have one; in fact, we may have many different callings through our lives. Someone told me after the event that they were going "to start working on projects that make me happy – I realised that I can work on things that I enjoy doing even though they won't necessarily lead to a career." That sounds like good advice to me. Or in the paraphrased words of Timothy Radcliffe, "find where your greatest joy meets the world's greatest need and do that.” So be yourself and do what makes you happy, whether that’s through work or volunteering, hobbies or at church.

I hope you aren't stressed, but I know that you might be. If you are in the North West and fancy a chat, get in touch, and if you are in Manchester, we're running a couple of Taize and pub nights – check out SCM Connect for the dates.

Tags:
Vocation
< Back to all blogs