Rach’s Diary: The Calm Before The Beginning 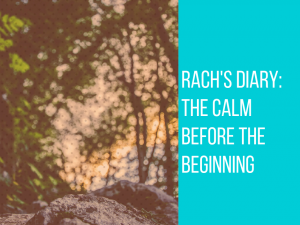 My summer has been an odd one. I’ve mostly worked from my desk in Salford with a couple of visits to Birmingham. It has been nice to have that time of calm but it's also meant that once September hit it was a bit of a shock to the system to get back to my usual train journeys around and about!

September began with the Student Leadership Training where 9 leaders from across the Movement joined together to talk about their favourite ice breakers as an ice breaker, discuss ways of having good discussions and learn which Winnie the Pooh character they are – I’m Piglet. This was as well as sessions on boundaries and self-care, leaders that inspire them - Biblical and modern - and how to use Social Media to build their communities. After two packed days the student leaders were sent back home ready for a full term of activities to begin.

This week I’ve been back in the North West firstly with a day in Preston then a day in Liverpool. I met with chaplains, SCM Student Contact PJ and had breakfast with a whole load of youth leaders. In my lunch break on Tuesday I stopped at a Cathedral. Liverpool has two Cathedrals, one Anglican and one Catholic. I’ve been to the Anglican one before when we held a Student Ministry Forum there. I know I’ve visited the Catholic one in the past but not in recent years so it was nice to take a break in the quiet. I walked around, looking at the sacred spaces and the beautiful glass in the roof, taking a moment to be, knowing that busy times were up ahead. I wonder where or how you like to pause and get ready at the beginning of something new?

Next week is the first of three welcome weeks I'm involed with, and I’m excited to see what this year has in store. If you would like to get involved with SCM’s work in the North West or beyond you can support us or get in touch to book a visit or have a chat.

A Biblical Look at Preparation
Rach's Reflection: Rest
Preparing for the Interruptions