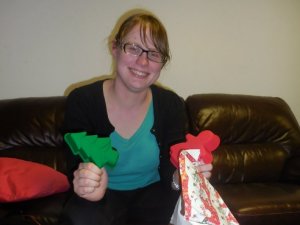 It's been strange this year, for the past three years I've been doing Christmas through worship and children's events throughout December. This year's Christmas events have been much more grown up on the whole and involved a lot less worship planning.

This December I've celebrated Christmas by:

Going to the panto and doing a secret Santa with the SCM staff and some of the GC in Manchester. It was lovely to have everyone join me in Manchester for a change and I even got a pot of saffron as my Christmas present.

Helping to host the St Peter's House Open House, which meant two whole hours of talking to people from the universities, local churches, other organisations and even an SCM friend. As well as eating more soup (parsnip this time) and a turkey sandwich.

I've also filled the past week with updating our database, starting to plan a SCM Breakfast in Liverpool in February, more details on that in the new year, and I've finished reading the history of SCM book that has joined me on many train journeys this term. The latter has been really interesting in what has changed but what has also been core to SCM since 1889. I love the fact that I am now a part of that history.

So now just to tie up a few loose ends, set my out-of-office and sign off for 2016. I'm really looking forward to what is going to happen with SCM and particularly in the North West in 2017.