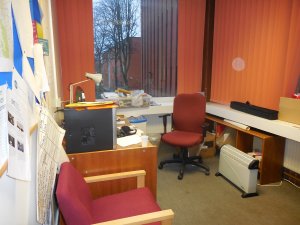 I've been back at work for a whole week after my Christmas break. It's been a full on first week, and I've spent much of it confused about which day of the week it is.

Tuesday started in Birmingham which was usual, though this term I'll be doing Wednesdays in Birmingham on a regular basis rather than Tuesdays. This confused my brain this morning when I was off to Ikea not to Birmingham. (You're starting to see why I'm confused). It was really great to start the year with the rest of the team at SCM HQ, we had team meeting, ate biscuits and I started to work out what 2017 is shaping up to be.

Wednesday and Thursday I went into St Peter's House, I spent time finding churches in Preston for my visit later this month, advertised the SCM Breakfast in Liverpool in February and catching up with the Chaplaincy here in Manchester. Most of that was done at my desk, which you can see above.

Friday was my train day, as I got to Birmingham ready for Saturday's General Council (GC) meeting. This went really well. Started with equality training and went on to explore where we are going as a movement. I come from a background of participation so one of the many things I love about SCM is the fact it is student led. In my eyes GC meetings are a highlight in the way that the staff connect with and work alongside the students who lead our charity.

Sunday I had a day off, which meant preaching, tidying my house and hosting a friend.

Monday was one of those days! The chaplaincy was full of international students when I got in, which after a week of no students at all was exciting. I prepared for my monthly review meeting tomorrow, worked out what train tickets I needed buying and did some more work on "Called to be..." our gathering in Manchester that is now 2 months away!!!

Today started at Ikea, where I met with the only member of SCM in the North West I hadn't yet met for a free coffee.  It was great to chat with her about life, church, university and SCM. I love meeting with students and recent graduates, so if that is you, and you are in the North West get in touch!

Tomorrow is Wednesday, so I'll be off to Birmingham - how very confusing.