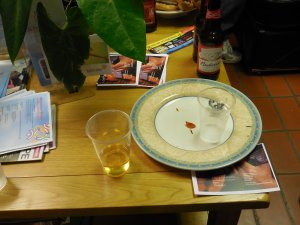 As a student, when we had a new chaplain start at my university I remembered saying the two things he needed for Student Ministry were food and Facebook. Similarly in my interview for this job, which was straight after lunch, I talked about the importance of food, particularly when meeting people, but also in support, encouragement and in building community.

Along with my train count (79 and another tram) I've been counting meals. It became a joke that I was obsessed with soup after a really good one in Wellington Church in Glasgow. They say there is no such thing as a free dinner, but so far I've managed 10 free meals. These have all been working lunches, from great soup with Project Bonhoeffer to lunch after the service at St Peter's on Sunday. Meals are a great way to connect and actually companion means 'together in bread'. The photo above is the the after shot from the successful beer, pizza and hymns night last Thursday at Manchester SCM where I hope we started to build community and companionship.

This week has also seen me getting to know new coffee shops, meeting with a PhD student to talk about her experiences of SCM in Manchester and beyond, and then later yesterday meeting with someone from one of the local churches to talk about becoming a Link Church.

If you'd like to meet me for coffee (mine's decaf, milk with two sugars) or maybe even a hot chocolate get in touch here