Rach's Diary - Here, There and Everywhere! 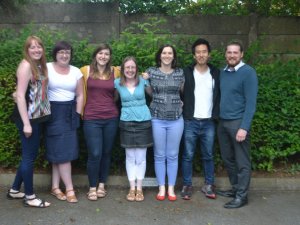 I have known for a while that June was going to be a very busy month. In the three weeks since I last wrote a diary blog a lot has happened! Here is just a snapshot of some of the places I've been to and the people I've met.

Just before the bank holiday weekend, I went to a Student Worker Breakfast in Manchester. It was great to meet student workers and other organisations doing important work in this city. St Peter's House Chaplaincy and others shared plans for the new term, while international student workers reminded us that the work doesn't end when the undergrad term is over. Then I had a long weekend camping holiday, which was much needed!

Just over a week later it was time for the last General Council meeting of the academic year. SCM's General Council is made up of trustees and portfolio holders and they make the decisions to guide SCM; on staffing, strategic priorities and much much more. We also used the opportunity of having all seven members of staff together in one place to take a new staff photo. It was actually a quick meeting which meant train 547 was two hours earlier than expected.

The next week sped by in a blur of event preparation. This meant that we were all ready on Friday 9th June to go to Leeds for the 2017 AGM and Summer Gathering. You can read more about that here or check out the Storify. One of the things that has stayed with me this week was how Dr Rachel Muers explored the theme of 'all are welcome' with us. I've pondered how many times I've sung the hymn and not really been able to mean it? What does it mean to have a God who came to earth with no home? What would it mean to live a life of unlimited hospitality? Maybe we can't know that this side of Heaven.

After a Monday off to recover I've had a week where I've been in a different place every day.

Tuesday was St Peter's House Chaplaincy Away Day. It was great to have a chance to explore what might be possible in Manchester over the next year. My responsibility for the day was to bring the ice-breaker which included writing your greatest achievement on a piece of paper and turning it into a paper aeroplane before throwing them and then working out whose was whose. We used the GROW method, Goals, Reality, Options and What next? It gave the day good shape.

On Wednesday I got to go to Birmingham to the SCM office. I caught up with the other staff, had my monthly review meeting and got back on top of my emails.

Thursday I went to Warrington to a different North West Office, that of Christian Aid. I had the chance to talk to the "Westside" team, both in Warrington and Birmingham via Skype and then talk to the suitable regional staff covering the North West about how we could work together in the different universities.

Now it's Friday, and I'm here in Manchester at my desk. My other big piece of work that has spanned the last few weeks is the preparation for SCALA (School Chaplain And Leaders Association) conference. This happens next week at Liverpool Hope and I'm running a workshop twice to help school chaplains prepare their pupils to become university students.

June will continue to be busy, most likely I'll catch my breath in July. See you then!