Rach's Diary - Just another month in the office 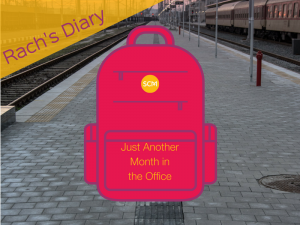 I'm not really sure where February has disappeared to! Last time I wrote a diary blog it was the 1st of the month, and here we are now at the end of the month. While the diary blog might not have been so regular I have written two reflection blogs, one on the University Ministry Forum in Manchester that I attended, and one about Student Sunday.

For a short month I managed to spend quite a few days at my desk during February, working on the SCM Green Challenges, preparing my sermon for Student Sunday and the prayer stations on the subsequent Day of Prayer for Students I held at St Peter's House. I've helped to write case studies for a fundraising bid, caught up with my emails and had the opportunity to catch up with local students, chaplains and even an SCM Friend.

After almost two whole weeks based at my desk I got back out and about, on the road for a change rather than on the rails. On Student Sunday preached at St Peter's Church in Manchester, and then later that day spoke about my work at Bowerham URC in Lancaster. It was great to meet people excited about SCM and even one who had been involved in her school years.

Last Monday had a very early start with the prayer stations needing to be set up before 8:30am. It was good to see people from near and far join together throughout the day to pray for students, and I'm thankful for the many people who took part in the day. Tuesday was yet another early start, with five trains to get to Birmingham. I caught up with colleagues, attended the SCM Team meeting and we said goodbyes to Lizzie as she finished as the Groups Worker after over six years with SCM.

On Wednesday I left Birmingham to go to Lancaster to talk to Lancaster SCM about Lent. We discussed the things we had taken up, including walking, yoga and thinking of three things they were thankful for.  I've taken up Instagram, and am having a go at the #SCMLent40 Challenges - follow the hashtag and join in yourself! We also spent time checking over the plans for Compline at Movement 2018: Gifts of Grace in Glasgow in two weeks time!

Thursday dawned a beautiful day and I walked from the University into Lancaster to meet with a church leader to continue conversations on how they can work with the students who live nearby. If you would like me to come and have that conversation with you then please do get in touch. I also had a soup lunch at the church before getting on a train to catch up with the Chaplain at UCLan in Preston, and talked about plans for their grand opening of the new faith centre in the coming months.

Finally three more trains and I was home. Taking my Feb travel count to 50 trains, 3 buses, and 4 trams and my train total to 985.

No week is ever the same and next week will be totally different again, but that is a story for another blog!

For those of you who pray for my work here in the North West, here are my latest prayer points: