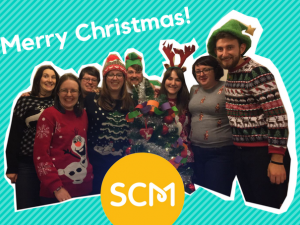 After a long weekend off it always takes some time to get back into the swing of work, and last Monday flew by in a mixture of catching up with emails, attending the St Peter's House Team meeting and preparing for other meetings later in the week.

Tuesday trains 853-856 got me to Birmingham to join the SCM staff for the team meeting, which included paperchain thank you prayers, introducing Jen (the new Fundraising and Communication Officer) and the news that we had launched SCM's Instagram, @StudentChristianMovement. It was also an opportunity to pull together some of our plans for the next term. After that it was time for SCM Christmas, #StudentChristmasMovement, which we celebrated by going out for lunch then heading back to the office for boardgames and nibbles!

Wednesday was more meetings and emails, before the train journey home reading one of the novels in the SCM library, "Speak Its Name", by Kathleen Jowitt. It's a really interesting story of a student working out who she is and how she can live out her faith authentically at university. It's so good I continued reading it in my free time.

Thursday was spent pulling together the resources I needed to run a session that evening at Manchester's Catholic Chaplaincy about why we campaign. I had a great evening introducing SCM and looking at the Desmond Tutu quotation, “There comes a point where we need to stop just pulling people out of the river. We need to go upstream and find out why they’re falling in”, as well as thinking about how we "See, Judge and Act" in terms of our faith, and hunger in the UK. The group then merged into a movie night and we watched Love Actually. Thursday lunchtime was spent with an SCM member, catching up and talking about how they could take a more active role. If you want to know how you can get more involved with SCM then becoming a member is a great first step!

I had already decided to work from home on Friday, but I was very glad when the snow started to fall on my journey home on Thursday that this was the case. I spent some time working through my email inbox and sorting through the suitcase of stuff that came back from the many events this term has held but most of all, and probably most excitedly, I spent time reflecting and focusing on what is to come and what can be done in the North West in 2018. Watch this space!

Somehow it is Monday again. I've sent emails, started writing my report for the General Council meeting in January, and here I am writing my blog.

Train total: 17 so far in December plus 4 Buses, making my total train count 865.