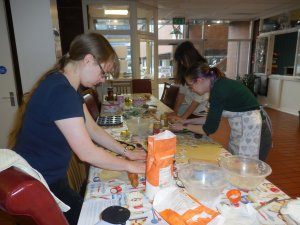 On Tuesday I headed to Birmingham for my weekly day in the SCM Office, and in my bag I took my five year journal. I'm 29 days from finishing the fourth year of it, and the question on Tuesday was 'Describe your mood in five words'. It was my turn to lead prayers at our SCM team meeting this week, so I took the question to the meeting to help us focus on how we were feeling that day, before we gave to God who we were at that moment.

On Wednesday I drew a map of the North West. I already have a map on my wall, so this wasn't a drawing of the mountains and the motorways, but the Chaplaincies, Link Churches, Members and other connections I've made in the past three months. Some places on my map looked busy, but in others there are still connections to be made. So this week I've been sending emails to arrange two more visits to Preston, confirm a trip to Lancaster this Sunday and offering dates for a visit to Chester in February.

Yesterday (Thursday) was Carry Two Baking Trays in Your Bag Day. It was also Meet an SCM Friend for Lunch Day and Cook Tea for SCM Manchester Day.

Meeting with SCM Friends is always a joy, and it's great to hear the stories of how they have been involved in SCM over the years. I've met with two local SCM Friends in the last seven days, and I've appreciated having people to bounce ideas off for Called to be... and particularly the Friends Gathering which will be happening on the Saturday evening. It's also nice to know that there are people who support the work of SCM both regionally and on a bigger scale.

After the pasta that I cooked for tea, SCM Manchester discussed who they are as a group and what next term could look like. Next week is the AGM where we formally work out how the group is going to run. Please keep SCM Manchester in your prayers.

Today (Friday) is Take Your Rolling Pin to Work Day. At St Peter's House Chaplaincy we're having a mince pie bake-a-thon. Along with Caroline, one of the chaplains, and some students from a number of societies who use the building (including SCM Manchester and the Baking Society) we made - you guessed it - mince pies ready for the carol service on Sunday evening. Now I just to remember to take the rolling pin and baking trays home again!

Tags:
Regional Worker
SCM friends
< Back to all blogs