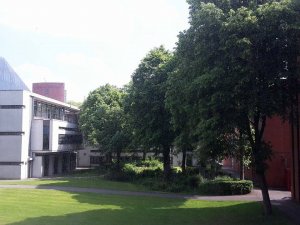 It is often the case I have a busy travelling week and then a mainly Manchester based week. This last fortnight has been a perfect example of that.

Last week started in Manchester. Monday was an admin day - finishing my Workplan and North West plans, getting papers ready for the General Council meeting at the start of June and updating our clever database with previous adventures and conversations.

Tuesday morning also started in Manchester with a meeting with Rev Caroline Ryder, a chaplain at St Peter's House about how the chaplaincy's vision can include justice at its core. I then got on a train to Preston to meet with Rev Andrew Clitherow, Chaplain at UCLan to hear about his plans for next year.

Wednesday was a Birmingham day, which was filled with Team Meeting, All Are Welcome planning and my monthly review meeting this time with both Hilary and Simon, our two National Coordinators. As I was preparing to go back up north it was the moment to say goodbye to Hilary as she goes off on her maternity leave.

Then I had a weekend off - which included another trip to Liverpool just for fun!

Monday I was back in the office in Manchester, where I to make plans for an event in the North West in November - watch this space for details! I also went to the St Peter's House team meeting and yet again tried to get up to date with the database.

Then Monday night happened. You can read my initial thoughts and prayer here.

Tuesday was a strange day in Manchester. We drove into work as my usual trains weren't running, and in some places it felt the same as normal. I walked  to the station at lunch time to pick up train tickets for the next day, and people were sitting, chatting, eating lunch just like a normal sunny day. My Facebook feed was full of churches opening their doors, but also people dealing with evacuations and so many police around. In mid-day prayers, we read this hymn.

On Wednesday I went to Birmingham for the SCM team meeting. It's sometimes really strange when you do normal things when life doesn't feel normal, but it was good. I met with Simon (now the only National Coordinator in the office) to look at my plans and put together my action plan for the next few months. We had a Team meeting and Ellis (SCM's Fundraising and Communications Officer) and I worked out some of the comms and fundraising plans for the North West. If you are interested in being part of Team North West by supporting the Hub financially please check this out.

It's Thursday again, and I'm yet again sat in my office in Manchester. The room that housed the reception of St Peter's House when I was last in has had its walls removed, so everything is a little bit strange here too. Today has already involved a Skype chat with a student and will go on to involve more event planning and more databasing!

Please continue to pray for Manchester, and all those affected by the events on Monday night.