Rach's Diary: A week in Manchester 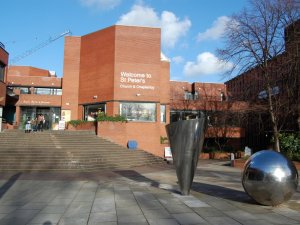 This week I've been calling a Manchester week. Aside from Tuesday, when I did my regular trip to Birmingham to see the team and pick up yet more copies of Movement, I've been based in Manchester at St Peter's House Chaplaincy.

This means I've had more of a 9-5 (ish) routine and the thing that strikes me most when I'm in Manchester for more than a day at a time is the issue of homelessness. Every morning I can pass anywhere between 2 and 6 people sitting on the streets, sometimes begging, sometimes sleeping and sometimes chatting with each other. One day this week I stopped off to buy some breakfast and was pleased that meant I could share cereal bars with those I passed that day. Before working for SCM I worked in an affluent village and homelessness was not really on my day-to-day radar. I typically buy a Big Issue if I have change when I'm passing one, though now I can pass three different vendors in a week depending on the route I take to and from work - therefore I've decided that the one outside the train station near the office in Birmingham is my regular Big Issue seller, and this week I asked her name, so hopefully next week I can ask her by name how she is doing.

There's not much I can do for homelessness in Manchester. It reminds me how privileged I am to be going into a job I enjoy or going to my nice secure home, but if I can put my faith into action through buying a Big Issue or sharing some breakfast, then that I will do. I'm always glad to hear of Ruth W's trips out and about, exploring Faith in Action with groups and am looking forward to how the newest campaign will yet again bring our faith to make a difference in the world.

By now you are probably wondering if I even did any work this week...

Well I've sent emails to everyone at the Glasgow Gathering to say thank you for being a part of the weekend and starting to plan for the Manchester one in March. I've met with someone from the URC North West Synod - South Area Pastoral Committee to talk about how SCM (and I) can support the URC in the North West. I've finally managed to get my computer connected to the internet, rather than borrowing a colleague's, so am starting to get my office set up in what I hope, for the time being at least, is its final configuration. I've written a workshop on worship ready to lead this evening with SCM Manchester. I've also booked more trips out and about so the next fortnight is looking very busy with lots more trains. Current total - 72 trains, 1 new tram (so thats 9 now) and still 7 buses and 1 subway for October.

My favourite train journey chat this week was on train 7 of 8 on Birmingham day. I got chatting with two people on the train about how money isn't everything and a job that makes you happy is more important. I mentioned I worked for a charity and they asked me about SCM and I even handed over a Moverment Magazine, explaining who Steve Chalke is. I hope this helped the 'not all Christians believe the same things' agenda.

Overall it's been a busy week with lots to ponder. I can't quite believe I've been in post for almost two months.